Tim Tebow has canceled a scheduled appearance at a controversial church whose leaders have repeatedly made shocking homophobic and anti-Semitic comments. 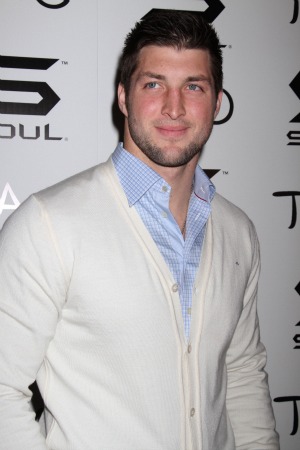 Tim Tebow‘s religion is an integral part of his image, but it appears that even he agrees that religion can go too far. The football star has canceled a scheduled appearance at a controversial church whose leader regularly says ugly things about gays, Jews, Muslims and Mormons.

Tebow was supposed to give a spiritual talk at the First Baptist Church in Dallas but received harsh backlash from the media after revelations that anti-gay pastor Robert Jeffress said 70 percent of homosexuals have AIDS, that most of them are child molesters, that Islam and the Mormon religion are “from the pit of Hell” and that followers of those religions, as well as Jews and gays, are damned for all eternity.

The public uproar from Tebow’s fans was enough to get him to call the whole thing off. He announced the change of plans on Twitter today, writing, “While I was looking forward to sharing a message of hope and Christ’s unconditional love with the faithful members of the historic First Baptist Church of Dallas in April, due to new information that has been brought to my attention, I have decided to cancel my upcoming appearance.”

“I will continue to use the platform God has blessed me with to bring Faith, Hope and Love to all those needing a brighter day,” he continued. “Thank you for all of your love and support. God Bless!”

Could Tebow’s reluctance be caused by his desire to try his hand at politics? Maybe, but regardless, the church is livid about Tebow’s decision. A rep revealed to TMZ that the football star called Jeffress yesterday to say for “personal and professional reasons he needed to avoid controversy.”

“We are saddened that Mr. Tebow felt pressure to back out of his long-planned commitment from numerous New York and national sports and news media who grossly misrepresented past comments made by our pastor, Dr. Robert Jeffress, specifically related to issues of homosexuality and AIDS, as well as Judaism.”