Charlie Sheen went out of his way to make sure Lindsay Lohan looked nice for a charity event, but what Lohan did with that kindness would make anyone think twice before lending her anything again. 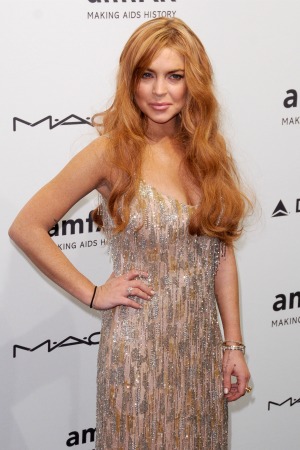 Lindsay Lohan doesn’t seem to understand the importance of something borrowed. The troubled actress was accused of trashing a trailer she was using while filming Liz & Dick last year, and this time it looks like she ruined a dress she was borrowing from a designer for a black-tie affair. A dress that a very famous friend went out of their way to get for her.

A source told the New York Daily News that Lohan was lent a Theia Couture dress (pictured here) for an amfAR event in New York City a few weeks ago, thanks to help from Charlie Sheen. The dress is reportedly worth $1,700. For some reason, the actress decided to wear it out to a nightclub. But the dress didn’t make it out… at least not in one piece.

“She said the dress ripped by accident and she got scissors from a bouncer at a club to fix it,” said Nancy Dillon with the New York Daily News. “She said she didn’t have a choice in the matter. God only knows what really happened.”

The dress was originally floor-length but was cut to well above the knee.

“The dress came back shredded,” the source said. “This was a beautiful dress with intricate chains and beading.”

Her stylist didn’t seem to think it was a big deal that she cut the dress (although he doesn’t have to pay for it to be replaced).

“She’s glamorous and a nice girl and knows what looks good on her,” stylist Phillip Bloch told Dillon. “I would definitely work with her again. I would just lay down some ground rules and do my best to make sure it never happens again.”

Perhaps the worst part of the story, though, is that one of LiLo’s friends went out of their way to help dress her for that evening. Her newfound friend Charlie Sheen had called Bloch just hours before the event to make sure Lohan had a nice dress to wear. He said if he had to, he would even “go halfsies” on the dress.

“Charlie has a long history of helping out his friends in many ways, and this is just another example of that,” a rep for Sheen told E! News.