Shakira and Usher are the new Christina Aguilera and CeeLo Green on The Voice, and the charismatic, cat-sporting Green explains what he’s doing next in an exclusive interview. 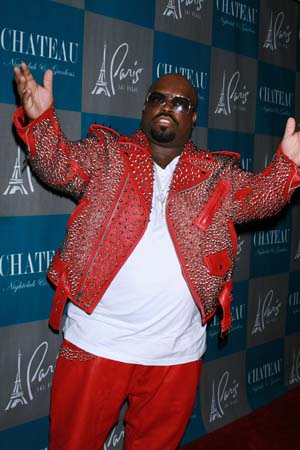 CeeLo Green is taking a break from The Voice this next season. Is he walking out over contract disputes? Totally sick of Adam Levine?

Nah, he’s just going to do a show in Las Vegas.

“CeeLo Green is Loberace” (Get it? Like Liberace but Lo-berace instead!) opens Feb. 27 at Planet Hollywood, and will run through April 2013.

Word is that the show will sing and dance its way through many decades of music; given that Green is known for putting a modern spin on retro soul/R&B stylings, we’d be particularly excited to see what he does to music from the 1960s and 1970s.

“We’re definitely going to do our best to make a fashion statement, make a social statement saying that all people belong together under the umbrella of good music,” Green told SheKnows Reality TV Magazine in an exclusive interview, adding, “it’s going to be fun; fireworks, fire-breathing dragons, unicorns!”

And one fluffy cat named Purrfect? Say, a girl can dream, right?

Meanwhile, The Voice will just have to limp on best it can, with Shakira and Usher taking up the empty coaching chairs vacated by Green and Christina Aguilera.

“Both figuratively and literally it’s going to change it completely,” Green said. “It’ll be a totally different show without me and Christina. I can only hope that it is as well-received but it’s its own competition and so therefore you don’t get a second chance to make a first impression. So that’s the harsh reality, that’s the pressure.”

As to the chances for Shakira and Usher making a splash, Green wishes them good luck.

“I wish them well and I would like to see our brand sustained,” he told SheKnows. “I’m very proud and protective of The Voice, the brand, the sentiment — you know, what it represents, so I’d like to see it do well but it’s up against a lot of scrutiny, but I wish them well.”