This lively band infuses poetic lyrics with an array of instruments: violin, cello, trumpet, trombone and French horn — how many bands do you know that can do that? 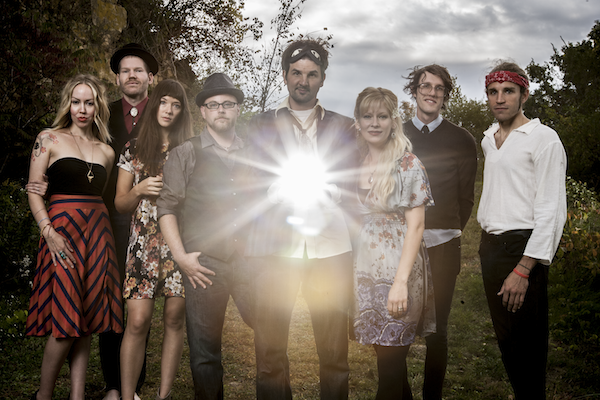 Sit back and let them cast their spell

This Midwestern chamber-rock band’s (as described in the MTV release) hypnotizing song is dripping with supernatural goodness.

Imagine a breezy summer day, warm sunshine on your back, a friendly face and hope for the future — and you have the emotional intent of the headliner, “Good Friend,” off their upcoming album Love. The music video (below) is directed by John Burgess. The song stirs the longing for a good friend who can support you through life’s ups and downs.

Want to see another music video we recommend? >>

It’s a melting cauldron of thumping drums, twinkling piano, guitar and laughing. The words of the passionate shout-aloud chorus are the first you hear — that’s right, no build-up or -down! It sounds like a group of friends cheering one another on, binding together like their souls are intertwined. It’s infectious! It’s also a tad reminiscent of “Ho Hey” by The Lumineers.

It involved eight members and three years to release their ninth album, according to mtvU. Performing with notable musicians like the Silversun Pickups and Bon Iver, they aren’t newbies on the scene. Their resume is stacked — Gossip Girl fans: their music has been featured on the show! They’ve even performed at Coachella, and were also selected as one of the Top 15 Green Bands by Grist.

What’s the lineup for Coachella this year? >>

Maybe I’ve been listening to too much of The Beatles “Here Comes The Sun” lately, but I couldn’t shake the striking resemblance the song has when it comes to vibrant, wholesome and good-intentioned music. Love promises lyrical art and encouraging melodies.

Cult or coven, I don’t care

The name both intrigued and worried me — but don’t let their name scare you. Their messages are welcoming and their sound is multi-dimensional. Some songs have a whimsical aura like it could feature Jason Mraz, and others have a trippier sound where they could feature Angels and Airwaves. I perused their album and their range is surprising.

Where has Jason Mraz been? >>

“The Calling” is poetry: “The bullets you take don’t go unnoticed” and “All our love, and all our pain is gonna make us precious” are some of the lyrics. “Complicated Creation” has a magical piano display. Both are definitely worth a listen.

It takes a village to raise a child, I hear, so it’s no surprise that this sizable band sounds as though they’ve put great care and consideration into developing their long-awaited album. The album drops on March 5 and they’ll be on tour in April and May, so keep an eye out!

Craving more? Check out our other music reviews: