David and Victoria Beckham have both been telling of a certain desire to make another little Beckham, as rumors rise that Beckham #7 is already on the way. 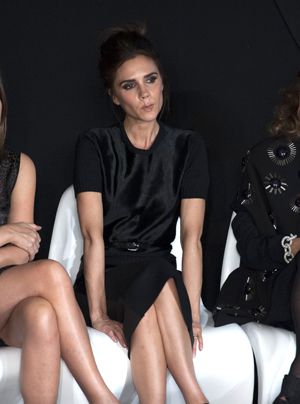 Only the Beckham family (and maybe a pregnancy test stick) knows Victoria Beckham’s conception status right now, but rumors are flying that she’s already knocked up.

Of course, gossip watchers will recall that it was bandied about that she was pg in October after she abstained from drinking during the Summer Olympics in London (what? Not even a Pimm’s Cup?). She shot that rumor down.

But Entertainment Wise reported that the Beckhams did try to conceive during said Olympics, as it would be fitting to get pregnant during the year of Queen Elizabeth’s Diamond Jubilee.

Both Beckhams are on record as saying they’d love a fifth child.

David Beckham told a British talk show that he and the former Posh Spice would like to have “one or two more” children.

“We’re not thinking about it yet, but if it happens, great,” the Daily Mail quotes him in his talk show interview. “We’re busy people and we’re enjoying the four kids that we’ve got already and we’re lucky, we’re lucky to have four healthy children.”

For her part, Victoria Beckham told Glamour in 2012 that in five years she’d “never say never about another baby. It’s a juggling act — a career, family, a husband who’s busy. But I’d never say never!”

Closer magazine reported that a source said Victoria and David’s lucky number is seven, so they’d like to add at least one more to their ridiculously gorgeous brood to get up to that number. She also wanted to give Harper a sister/best friend.

Closer also reported this month that with David signed on to play with French soccer club Paris Saint-Germain, the family is settled in Paris together after living in Los Angeles for several years.

Perhaps a little one to brighten up Chez Beckham?