Kim Kardashian has turned heads with her fashion choices, both before and during pregnancy. But the mom-to-be explains her body makes her dress that way. 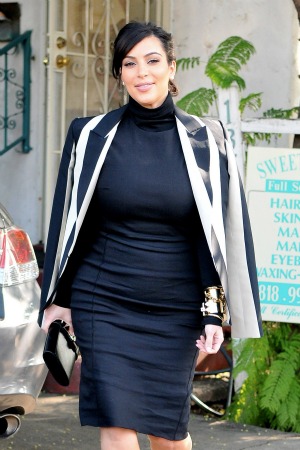 If you thought Kim Kardashian’s pregnancy would get her to wear more appropriate clothing, you would be wrong. Kardashian’s choice of maternity clothes has some questioning her fashion sense, but she says she dresses that way because of that fashion sense.

“I think because I have big boobs it could make me look heavier if I don’t, like, show off my waist or something,” Kardashian told DuJour magazine. “So I just have kind of learned to dress one way only.”

Kardashian also seems to compare herself to her sisters, but the three are completely different when it comes to size, shape and fashion sense.

“Khloé can wear flowy, pretty things because she’s really tall. Kourtney is, like, really little,” she told the magazine “I’m just kind of in between, so it doesn’t really work.”

What do celebrity couples’ outfits reveal about their relationship? >>

But Kardashian has to deal with something very few pregnant women do: going through your pregnancy in the public eye.

“When you live your life so publicly, like on a reality show, people assume that they know every side of you already,” Kardashian said. “But they always want more.”

Besides the world following her every move, the pregnancy has brought many other new challenges. Kardashian says she was always excited for pregnancy so she could eat whatever she wanted, but she has found the opposite is true.

“I’m like, OK, I want to eat as healthy as possible,” she said. “Though lately I’ve been watching shows like I’m Pregnant And Addicted to Meth. It definitely makes me feel better if I’m wanting one sip of Diet Coke or, you know, too much sugar. I’m like, ‘This woman is on meth.’”

Just like her sister Khloé, Kim knew she could have difficulty having children. But now that she’s pregnant, she’s excited for things to come.

“I just feel so blessed and excited and ready for the next phase,” she said.