There are more secrets to hide when a threat leads to a possible murder, a new love blossoms and a loved one returns. 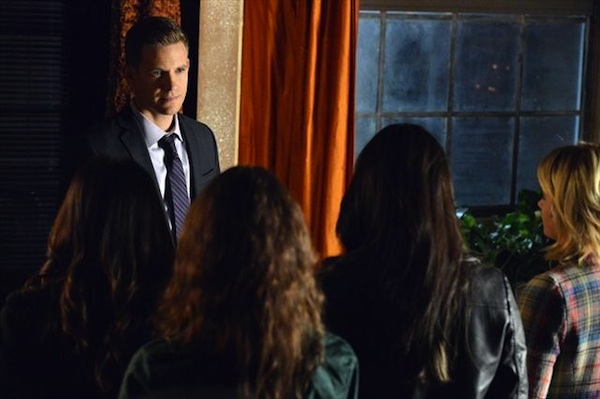 Before we discuss all the drama that went down in this week’s Pretty Little Liars, I just have to mention that Spencer’s (Troian Bellisario) outburst at Mona (Janel Parrish) last week was the single greatest moment in PLL history! It was completely LOL-worthy and Mona totally had it coming. Now we can move on.

Speaking of Spencer, she actually had a good week… at first. Wren (Julian Morris) finally confessed he’s been crushing on her for the longest time. When he heard about her breakup, he hoped they had a chance. Spence agreed to go out with him and actually had a great time. It was nice to see her a different shade other than dead pale and with a smile on her face.

Unfortunately one of A’s minions was not as happy for her. After a heavy makeout session with Wren in the street, someone decided to let her know they didn’t approve of her hookup. Someone locked her in her super fancy hot sauna in her home. She was saved when Aria (singer Lucy Hale) suddenly burst in — otherwise she would have been a goner.

Lucy Hale dishes on boys and her eating disorder >>

The likely suspect is, of course, Toby. But, if he was faking the relationship the whole time, would he really be so jealous? Evidence also points to Melissa, yet again. Especially after the girls learn that Melissa was actually the one who took the picture of Ali and Detective Wilden on the boat! Gasps all around. That Hastings is hiding some serious dirt.

While we’re talking about Wilden, it’s important to mention that Hanna’s (best dressed Ashley Benson) mom ran him over with her car and he might be bleeding to death in the woods right now. Wilden learned that Hanna was spreading rumors that he got Ali pregnant and then killed her. So he threatens Ashley if she doesn’t make Hanna shut up. But the argument gets heated and it looks like Wilden’s about to pull out a gun so Ashley freaks, runs him over with her car and drives away. Unfortunately, it was all caught on the security camera in Wilden’s cop car. Uh-oh, that’s gonna lead to a lot more lying, scheming and footage stealing!

One last important note: Ezra’s (Ian Harding) back and more serious about Aria than ever! Which half sucks for her since she just kissed his little brother. Oops. Just more ammunition for A’s shotgun of torture.