Tensions rise when Julia is introduced to the sexy know-it-all script doctor who has been hired to fix Bombshell. 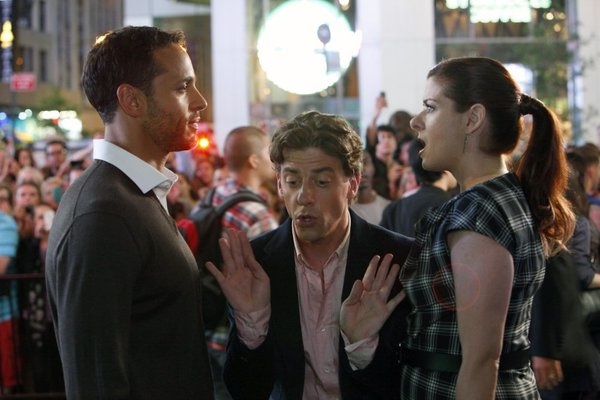 Everyone and their mother knows that Bombshell is in some trouble and needs a heavy rewrite, but Julia (recently divorced Debra Messing) seems to have a hard time accepting this. To force Julia to make changes to the script, Eileen (Anjelica Huston) brings in a renowned script doctor (and possibly the most beautiful man in the world) Peter (Daniel Sunjata). Peter has an incredibly sexy and polite way of telling Julia her show book sucks, but no matter how he words it, she throws a tantrum that would rival any 2-year-old’s. His number one point is that sex sells and Bombshell just isn’t sexy enough. Maybe it’s because she knows he’s right?

After Peter challenges her to bring “the heat,” if she even knows what heat is, Julia and Tom (Christian Borle) write a sexy little number that might pull Bombshell in a more provocative direction. The duet is between JFK and Marilyn and still misses the mark as it portrays Marilyn as a victim being taken advantage of by a powerful man. Peter tells Julia she needs to start looking at Marilyn as the powerful sexpot she was, or at least a willing participant. (Side note: Why isn’t Tom getting any of the blame for Bombshell’s shortcomings?)

In other writer news, Karen (Katharine McPhee) was finally able to set up the meeting between Derek (Jack Davenport) and her new friends Jimmy and Kyle. They give Derek their very animated pitch (which sounds good, but may be a little… much? But it is Broadway.). Derek likes it and sticks around to hear some songs when he notices Karen’s attention has shifted to Jimmy. You have to wonder if Derek will hold this against Jimmy when moving forward with the show. After all, he loves being the center of attention.

In other news, Veronica (engaged Jennifer Hudson) wants to do a spectacular and sexy one night only show that would help break her out of her sweetheart image and she wants Derek to direct it. He certainly is the right person for the job if you’re looking for something a bit scandalous.

And Ivy (Megan Hilty), the apparent underdog this season, just landed the lead role as Cecile in a play adapted from Dangerous Liaisons. The description of the character included the line “she tortures the men who hurt her.” Ivy really does seem perfect for the role even if her angelic side is shining through a bit more these days.