He’s muscular, he’s an action star, and he sings? Vin Diesel shows his romantic side with a little help from Rihanna. 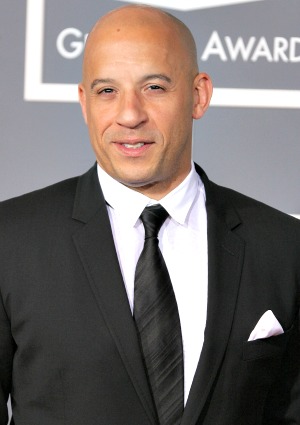 Who knew that Vin Diesel was such a romantic? His girlfriend, Paloma Jimenez, clearly knows now, since she was on the receiving end of a Valentine’s Day gift that has gone viral.

On the day of love, the actor posted a raw video of himself singing along to Rihanna‘s single “Stay.” It was just Diesel in a dark room with a microphone and the Rihanna video projected on the wall next to him. The video was uploaded to his public Facebook page, where it got a lot of positive comments from his fans.

It went over so well that the Fast and Furious actor decided to recut the video with better lighting and a more artistic feel. He uploaded the new one on Monday.

On his Facebook page, Diesel revealed, “So Our Vinbook video went viral… Naturally, I became self-conscious… and thought maybe I shouldn’t have exposed myself like that… Then I had dinner with my dad, and surprisingly… he said he loved it… and thought it was deep on a few levels….”

Not only did Diesel’s dad respond, so did Hollywood.

The actor shared, “The Studio called today… and asked if I would be interested in doing a Musical… Hmmm… P.s. Don’t be afraid to step out of your comfort zone, you don’t have to be perfect… just believe in yourself.”

It might be interesting to see the muscular action star sing in his impressive range and break out of his stereotypical movie roles. While there is certainly no casting news to announce yet, it is something for Diesel to mull over.

What is certain is that he loves his girlfriend, whom he addressed in the video with “Happy V day, amore,” three times at the end of the song.

Diesel, who is notoriously private about his personal life, told Hollywood.com in 2006, “I’m not gonna put it out there on a magazine cover like some other actors. I come from the Harrison Ford, Marlon Brando, Robert De Niro, Al Pacino code of silence.”

It looks like that silence was just broken with a song.

3 mins ago
by Daisy Maldonado