The baby boom has hit Hollywood! Extra host, Mario Lopez, and his wife, Courtney Mazza, announced on Tuesday that they are expecting their second baby. 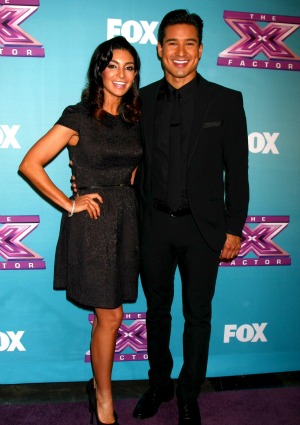 This is the month of love. and it seems like all of Hollywood is sharing exciting pregnancy news with their fans. Now, let’s add one more to that baby list.

Extra exclusively announced on Tuesday that host Mario Lopez and his wife, Courtney Mazza, are expecting their second child.

Mario told Extra, “I am the happiest father in the world. We cannot wait to welcome baby Lopez No. 2 into our lives.”

The news was announced at the taping of their daily entertainment show at The Grove in Los Angeles. Co-host Maria Menounos was on hand to assist with the big news. The mama-to-be walked on set with their 2-year-old daughter, who wore a T-shirt proclaiming, “Big Sister Gia.”

The X-Factor host exclaimed, “The Lopez family is having another baby!”

Pregnancy concierge Rosie Pope was also there to help celebrate. She gifted Courtney with one of the maternity dresses from her fashion line and offered Mario her book, Mommy IQ, to brush up on a few parenthood tips.

One person in the house might be a bit apprehensive about the new addition. When the Lopezes’ little girl was asked by Menounos if she wanted a brother, sister or a monkey, she stated, “A monkey.”

So how is pregnancy treating Mazza? She told Us Weekly, “I’m due around Gia’s birthday [Sept. 11]. I’m in that stage where I can’t fit into my regular clothes anymore but I can’t fit into maternity clothes yet either. But I’m good, it’s all good!”

And how is dad doing? Lopez is taking it all in stride, saying, “I’m just so excited I can’t take it!”

The couple met in New York when they were both starring in the Broadway revival of A Chorus Line. They began dating in 2008, had baby Gia in 2010, and married last December in Mexico. Their wedding was filmed for TLC and aired as a two-hour special.

46 mins ago
by Scarlett Harris