He spent much of his youth draped in veils or wearing a mask while in public. Now the 16-year-old son of Michael Jackson has a high-profile television job. 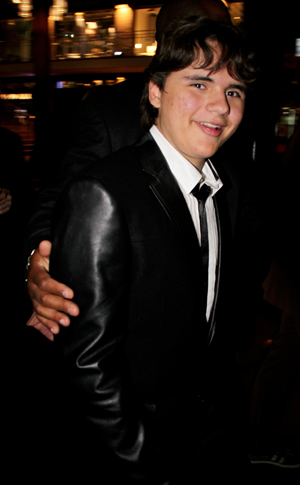 Congratulations to Prince Michael Jackson, who has a brand-new job: special guest correspondent for Entertainment Tonight.

Jackson, the eldest son of late singer Michael Jackson, landed the gig with ET due to his connection with correspondent Brooke Anderson, Entertainment Weekly reports.

Anderson told the Los Angeles Times that she shares a “mutual connection” with Jackson, and she’d been wanting to work with him since she met him.

She hit upon the idea of using him to interview the stars of Oz the Great and Powerful because dad Michael Jackson was in Wizard of Oz takeoff The Wiz in back in 1978.

Jackson, who’s in high school, didn’t miss any school for the job; ET filmed over the long President’s Day weekend. It was an easy shoot, Anderson told the LA Times: “He really did not need that much coaching. This may sound strange because he’s 16, but he was very smooth and confident,” Anderson said.

Jackson interviewed director Sam Raimi and actors James Franco and Zach Braff. All Anderson said she had to do to prep him was go over potential questions, and brainstorm some ways to dispel tension (which included a set of push-ups that Anderson and Jackson did together, awww).

“He created a really great energy, and they were all surprised by how knowledgeable he was about the film industry. He knew technical 3-D terms that I had no idea about,” Anderson said.

Jackson’s interviews with the Oz stars will air all this week.

Gotta hand it to MJ, he seemed like a weird guy but his kids only say great stuff about him. Anderson told Jackson he seemed wise for his age, and Jackson replied, “That was all thanks to my dad. He raised me right.”

Prince Michael’s sister Paris Jackson, 14, told Oprah’s Next Chapter in 2012 that she still misses her father all the time, and that she and brothers Prince Michael and Blanket, 10, “had a normal childhood.”

Are the Jackson siblings asking for an abnormal adolescence by checking into showbiz?