TMZ grabbed a close-up shot of Britney Spears’ grocery list, and now everyone’s talking about what Spears does when she goes out on errands.

Related story Britney Spears Shares Birthday Tribute to Her Sons: ‘Love You Both So Much’ 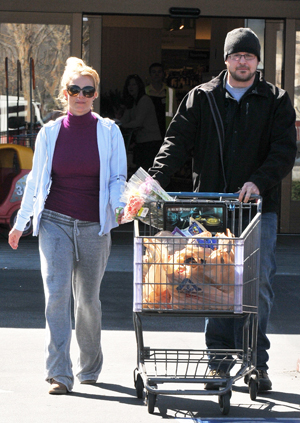 Here’s the difference between Britney Spears and you: You make out a grocery list and even the people who are going to be eating the food on it barely care. Britney Spears’ grocery list, now, everyone wants to see it.

Why? Because it’s so shocking. Shockingly normal, that is.

Nods to her two sons included a notation to get Lunchables and Smart popcorn. Britney, do you mean cheesy Smartfood? Or Orville Redenbacher’s SmartPop microwave popcorn? Could you be more exact, please, when making out your grocery list that you didn’t realize would be papped?

TMZ notes that Spears was also clad in “her best Kate Gosselin soccer mom chic,” in gray sweatpants and a hoodie.

Which boy band member made Britney and Demi swoon? >>

Don’t stars usually have people to pick things up for them? And then other people to cook said things? Or is Spears, who generally makes headlines for wacky antics instead of surprising normalcy, actually picking up items that she plans to fix for her family with her own two (expensively well-groomed) little hands?

Spears also made headlines recently with the news that she won’t return for a second season of The X Factor. Why? She wants to focus on a new album of her own.

“I’ve made the very difficult decision not to return for another season. I had an incredible time doing the show and I love the other judges and I am so proud of my teens but it’s time for me to get back in the studio,” Spears said.

Will you miss watching Spears on The X Factor? Do you judge her purchase of Lunchables just a tad?