Kate Middleton has been attacked by a two-time Booker Prize winner as being nothing more than a clothes horse whose only purpose is to breed. 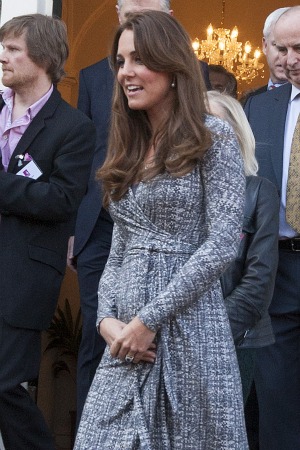 Kate Middleton stepped out to support one of her pet charities today in the wake of an attack on her usefulness — or lack thereof — and revealed her burgeoning baby bump.

Wearing a gray and white wrap dress and a huge smile, Kate was either oblivious to the insulting words of Hilary Mantel or, more likely, she just doesn’t care because she’s going to be queen one day and Mantel is not.

What exactly did the author say that was so horrid? In a speech earlier this month, Mantel referred to Kate as “a jointed doll on which certain rags were hung… a shop-window mannequin,” adding that she “appeared to have been designed by committee and built by craftsmen, with a perfect plastic smile and the spindles of her limbs hand-turned and gloss-varnished.”

Duchess Kate wants her mom to be the royal nanny >>

The speech was meant to be a look at how the press and public place royals on a pedestal then tear them down — but it seemed to be Mantel who was doing all the tearing down of Kate, despite the fact that the author did note this view was what she saw of the Duchess as constructed by the press and public.

Ironically, Mantel ended the speech with a plea “to back off and not be brutes” to the royals.

Needless to say, royal fans are in an uproar over the attack. Even David Cameron is wading into the furor to defend the Duchess. Saying that Hilary Mantel is “a great writer” but that her comments were “a hurtful thing to say,” he described the author’s attack as “completely misguided and completely wrong.”

The Prime Minister told the BBC, “What I’ve seen of ‘Princess Kate’ at public events, at the Olympics and elsewhere is this is someone who’s bright, who’s engaging, who’s a fantastic ambassador for Britain.”

“We should be proud of that, rather than make these rather misguided remarks.”

The head of one of Kate’s favorite charities agrees. Nick Barton, chief executive of Action on Addiction, spoke of Kate ahead of her visit to Hope House this morning. He said, “I can only speak of what I know, and having met the Duchess several times I find her to be engaging, natural and genuinely interested in the subject.”

“You can tell a lot about someone from the questions they ask and she asks really good questions, the questions of someone who wants to learn. She is also an intelligent woman.”

Kate’s baby is due in July.