Little Joey gets tired of missing his mother and sneaks a phone call that gives the FBI a major lead. 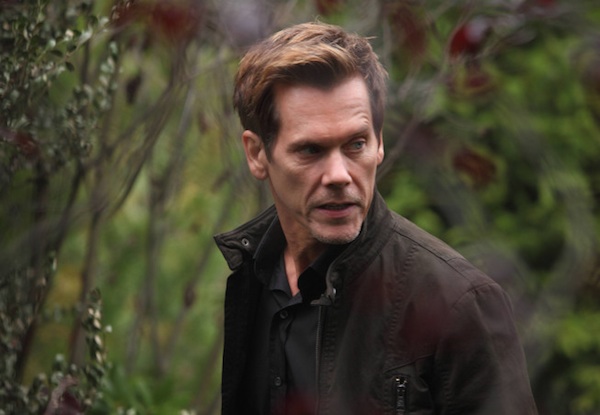 Kevin Bacon lured by The Following >>

While Jacob is “freaking out” in silence and Paul and Emma are cozied up in bed, young Joey decides to call his mother. He finds the hidden cellphone and makes the call from under a table. He tells Claire (stylish Natalie Zea) that he doesn’t like Paul because he’s mean, and that Denise (it’s interesting he hasn’t learned her real name yet after being stuck in that house for so long) won’t let him come home. He tells Claire what the house looks like in the country so she can come pick him up, but it doesn’t take long for Paul to find him and carry him away from the phone.

Meanwhile, Joe Carroll (James Purefoy) is blackmailing his attorney, Olivia, to deliver messages for him. In a press conference, she reads a verse from Poe that triggers the next stage of followers. Then Olivia tells Claire she has to meet one of Carroll’s followers if she ever wants to see her son again. Claire manages to escape her FBI tail in a restaurant and is picked up on a street corner by one of Carroll’s minions.

Ryan Hardy (good guy Kevin Bacon) and the FBI have figured out where Joey is and he rushes out to Dutchess County to find him. He is able to sneak into the house through the basement, and promises Megan he’ll save her and then rushes to find Joey. Just when everything looks clear and Joey is within inches of safety, Paul sneaks up behind Hardy and puts a gun to his head. Fade to black.

Now Carroll’s people have Joey, Hardy and Claire. Sounds like Carroll’s real-live novel is coming along according to plan. It certainly is dramatic.