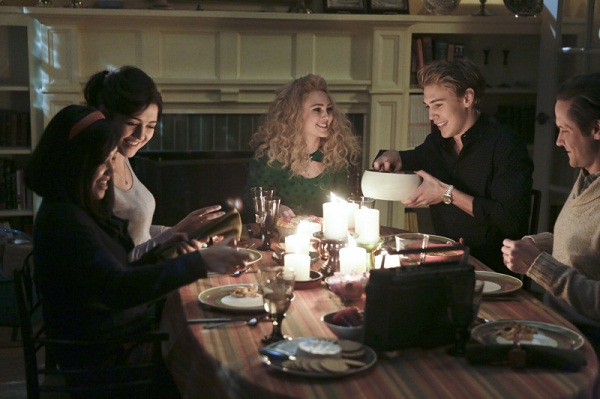 Like we mentioned in the preview, no matter how hard Carrie (AnnaSophia Robb) tries, she just can’t seem to get things to turn out in her favor. Such was the case for her on Thanksgiving. To help make things better, though, she has great friends who are there for her no matter what.

Last time on The Carrie Diaries >>

What started out as a small family meal for just Carrie, her dad and Dorrit to celebrate her late mother’s favorite holiday, quickly turned into a massive undertaking. Why? Carrie’s dad invited his BFF, Harlan, and his son (Carrie’s boyfriend), George, for Thanksgiving dinner, too. George is a big city kid and Carrie was determined to make things perfect.

The only problem was that Carrie had never cooked a Thanksgiving meal. Dorrit used to at least hang out in the kitchen with their mom and watch. Carrie, however, stayed in the living room to watch football with her father.

Among the many cons of the evening, the worst part was when Carrie fried the circuits and killed their electricity until morning. Poor Harlan and George ended up leaving without a Thanksgiving dinner and Carrie was left mortified. 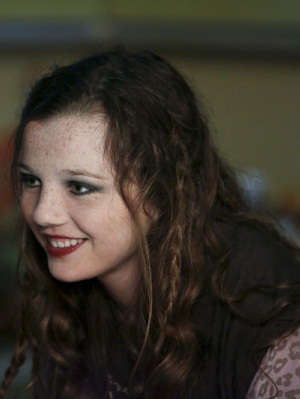 Every time it seems like Dorrit has straightened up and has stopped being a brat, she acts out again. This time, she was determined to embarrass her sister and sought attention by sneaking away to smoke pot on numerous occasions. Admittedly, her efforts to embarrass her sister were pretty funny. Carrie’s girlhood crush was Donny Osmond and, after she thought she’d hid his picture from George, it turned up on a table in a high traffic area of the house. Well played, Dorrit.

Eventually the sisters went into meltdown mode. Why? As it turns out, Dorrit didn’t want Carrie to save Thanksgiving — she wanted it to be a little miserable. That’s how she felt about their mother not being there, anyway… why not just have a pity party instead? Worse still, Carrie was donning their mother’s apron. That stung a little.

What eventually fixed things (for now)? Carrie didn’t tell their dad that she caught Dorrit with pot.

In other news, Sebastian (the super cute Austin Butler) was completely bailed on by his mom for Thanksgiving. His maid-type-person invited him over for dinner at her house, but the poor kid was too bummed to go. Later, the phone rang (it was Donna, right?) and he said he’d be over. The next thing we knew, though, he was showing up at Carrie’s door. If it was Donna, why’d he go to Carrie’s instead? If it wasn’t Donna… who invited him over? Best guess: Mouse. She’s awesome like that.

Maggie. Giving up the goods.

During Thanksgiving dinner with Walt’s family, Maggie realized just how ill-prepared she is for college. Walt’s parents have his life all figured out for him. Meanwhile, Maggie’s parents couldn’t care less. When she talked to her brother, she found out there isn’t even money saved to help pay for college. (Welcome to real life, sweetie!) Somehow this news inspired Maggie to devote herself to Walt. When her secret cop boyfriend came to visit her that evening, she kicked him to the curb.

In the end, everyone showed up to Carrie’s house, of course. The family, Carrie’s two best gal pals and Kidd dined by candlelight on crackers and cheese. Leave it to Carrie to turn things around at the last minute!