It’s been two decades since the release of Jurassic Park, and people are still interested in the franchise. Steven Spielberg has plans for a fourth film, but it will be without his famous producing partner. 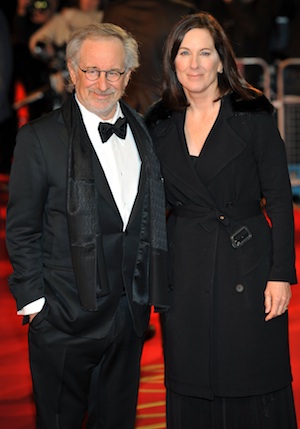 Kathleen Kennedy is one of the most powerful women in Hollywood. She’s produced iconic films that have stood the test of time. One of her biggest titles is Steven Spielberg‘s Jurassic Park. The franchise, which began in 1993, is set for a revival. Unfortunately, Kennedy won’t be a part of it.

Kennedy has too much on her plate. As co-chair of Lucasfilm, she has a new Star Wars trilogy to think about. Therefore, her involvement with Jurassic Park IV seems highly unlikely.

On Twitter, Kennedy’s husband, Frank Marshall, wrote, “No. Ms. Kennedy has moved onto Star Wars and will not be producing JP4. She’s traded raptors for TIE fighters.”

Meanwhile, Spielberg will be back but only as a producer. They’ve yet to hire a director to tackle the long-developing sequel. It’s hard to believe, but the last Jurassic Park film hit theaters 12 years ago! Jurassic Park III opened in 2001 and was directed by Joe Johnston.

Some of Kennedy’s notable works include E.T. the Extra Terrestrial, the Indiana Jones series, Back to the Future, The Color Purple, Schindler’s List and, most recently, Lincoln.

Last year, she spoke to ComingSoon.net about the multiple attempts to revamp the dinosaur series.

“As filmmakers, we often sit there going, ‘Okay. We have to answer the question, ‘Why do another one?’ If you can’t answer that question, you shouldn’t be doing it. It’s tough. We’re trying to come up with a story that makes sense and isn’t going to disappoint people and is, hopefully, going to get people excited and reinvigorate the franchise.”