Chaz Bono’s weight loss is going so well he’s doubling down on the amount he aims to lose! No starvation though — the 43-year-old insists he’s on a strictly healthy diet. 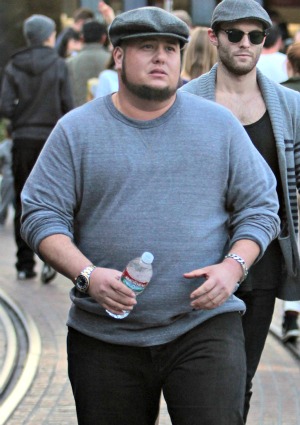 There’s a little less of Chaz Bono to love these days, and he couldn’t be happier! Already down an impressive 43 pounds, the former Dancing With the Stars contestant now has his sights set on an even bigger accomplishment.

Chaz Bono, seen here in December, first went public with his 50-pound weight-loss goal in mid-November. Although he’s very close to reaching that amount, the bar has now been raised to an 80-pound goal!

“I’ve been sticking to a really strict diet,” Chaz Bono recently explained to People. “It’s not any type of starvation thing. I’m just cutting out a lot of stuff and eating primarily protein and vegetables and fruit.”

“It hasn’t been that long, but when you’re a guy and you’ve got a lot of weight to lose, the initial stuff comes off pretty easily,” the only child of singer Cher and the late Sonny Bono, who legally became a man in 2010, continued.

“You start to see results and you want to keep going. It’s not to say you don’t have cravings sometimes, but I’m very happy with how I’m looking and feeling. Especially when I’m traveling or I have to go out to eat or whatever, it’s actually kind of easier than I thought to [eat healthy], so that’s been good.”

“There haven’t really been any bad parts to this so far, except certain stuff that I miss eating,” the 43-year-old added. “But ultimately, I would much rather look and feel better than eat those things. Everything else has been really great. I feel better and when I look in the mirror, I like what I see better.”

Also helping Chaz Bono’s weight loss success? Love from fans far and wide. He tweeted Monday evening, “Thanks for all the supportive tweets about my weight loss, appreciate it.”