Not yet, but he’s sure pulling out all the stops this year in an attempt to be cool. Oscar has stumbled onto a cold reality — his celebrity-studded celebration of Hollywood’s finest accomplishments translates into a real snooze-fest for the public. But not this year. Here are a few ways Oscar is bringing his “A game” to the 85th Academy Awards… 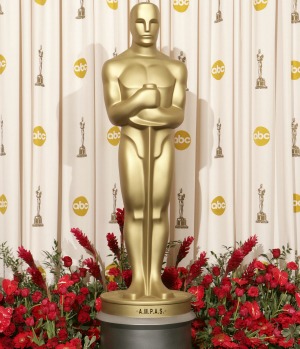 Is Seth MacFarlane the coolest, most unassuming guy in Hollywood? Pretty much. He’s the mastermind behind Family Guy and Ted (the highest-grossing R-rated film EV-er) and is nominated for an Oscar for best song, making him the first Oscar host to be in Oscar contention. Known for his inappropriate, envelope-pushing humor, Seth is certain to serve up a little edge at the Oscars. And this is Hollywood, so talk about a room of material at Seth’s disposal! Will Oscar’s attempt to bring in a younger and hipper crowd pay off? Oscar is counting on us to tune in and find out.

Oscar, you sly dog you! This year, four Oscar-winning actresses are confirmed to present — Halle Berry, Nicole Kidman, Sandra Bullock and Reese Witherspoon. With all these beauties, who will be the beast? John Travolta, while not beastly per se, has been shrouded in tales of impropriety for several months. Seems Oscar may be testing the tried-and-true formula for tabloid TV — sex and scandal.

Oscars? There’s an app for that

Look who’s getting all techie at 85! For the first time, the Academy Awards will be held at the Dolby Theater in Hollywood to bring the audience and viewers the best audio experience possible. On top of that, not only can members of the Academy vote electronically this year, but there is also an app for Oscar die-hards! An electronic “back-stage pass,” the official Oscars app (My Picks) gives you all the inside scoops on nominees, and it allows you to cast a vote for your personal faves. You can even stalk your favorite stars from the red carpet, to the stage, to behind the scenes on Hollywood’s biggest night!

Oscar isn’t done making history. In another Oscar first, the “Oscar Roadtrip” kicked off in New York City Feb. 4 and will be visiting cities in a cross-country tour to reach Hollywood by the night of the Oscars, Feb. 24.

“We created the Oscar Roadtrip to bring the magic and fun of the Oscar ceremony to movie fans across the country,” said Josh Spector, managing director of digital media and marketing for the Academy. “The Oscar Roadtrip makes it possible to share the once-in-a-lifetime thrill that only comes from holding an Oscar statuette.”

Real people sound off on Oscar-nominated movies
The Oscars: A guide to movies you probably haven’t seen
Joaquin Phoenix’s PETA ad banned from the Oscars?

Are you going to watch the Oscars this year, or are you taking a big, fat pass?