Seth MacFarlane is one hilarious guy, but will his jokes go over with the Academy Awards crowd? 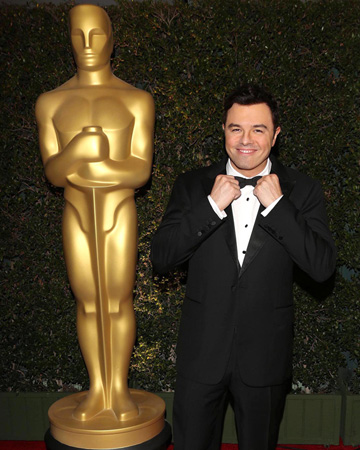 We’ve had a mixed bag when it comes to awards-show hosts in 2013: Tina Fey and Amy Poehler killed it at the Golden Globes, while LL Cool J played it safe at the Grammys.

Now, we’re on to the final host of the season: Family Guy creator Seth MacFarlane for the Academy Awards.

The mastermind behind Ted is no stranger to raunchy comedy. The big question: Will he tone down his jokes for the show? He vows to make the show family friendly. Well, kind of.

“The Oscars will still be something a family in 2013 can sit down and watch and be just fine with,” he told USA Today. “A family in 1955 might have some issue[s] with it. In 2013, everyone will be fine. Then again, I’m not married and I don’t have kids. And my mother was saying [nasty things] out loud by the time I was 5. So maybe I’m the wrong guy to ask.”

However, we should expect him to harp on celebrities like former Globes host Ricky Gervais.

“There is a certain element, even in the days when [five-time host] Johnny Carson was there, of roasting,” MacFarlane added. “It’s just a matter of how black the meat gets. I’m going somewhere from medium to medium-well.”

Our advice for Seth

We’re pulling for MacFarlane to do the (almost) impossible: entertain the audience while keeping A-lister egos in check. It’s a tricky game, so we have a bit of advice for him:

What should Seth MacFarlane do to make the Oscars entertaining? Sound off in the comments below!