The latest photos Boy George’s weight loss reveal a slim and trim new man! Check out the singer’s evolution, from late 2011 to early 2013 — and find out the details on the diet plan he now swears by. 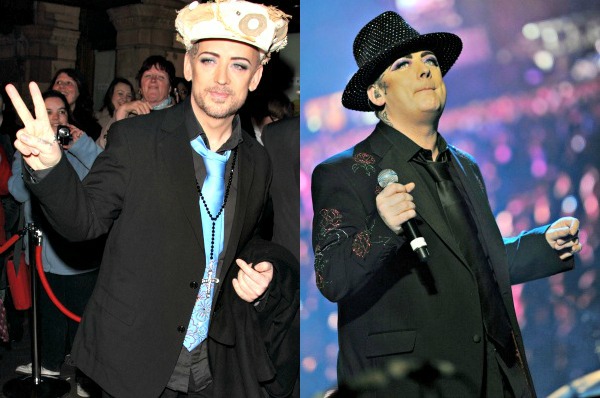 Seen above in the image on the left on Feb. 17 in London, Boy George’s weight loss is readily evident when compared to a picture from just over a year ago. The fuller face, seen above right, was photographed in Australia at a New Year’s Eve concert in late 2011.

How’d he do it? According to tweets sent out by the “Karma Chameleon” singer himself, the weight loss is due to Amelia Freer’s Freer Nutrition plan. “5 hour gaps between meals,” Boy George tweeted Sunday. “No coffee or tea, except at meals. Water & fizzy water between meals! No bread, sugar!”

Curious to know what exactly is left to eat if you cut all of that out of your diet? George went on to tweet photos of his new, healthy meals, titled “spicy broccoli cheese,” and “Cannelloni bean & veggie curry.”

When asked how much he spent on the Freer Nutrition plan, the now-svelte singer replied, “£750 over 3 months is how much a day? come on, my maths are shite! lol!” Followers quick with the calculator pointed out that’s approximately £8.33 per day — $11.44 per day for those of us stateside, or just over $1000 for the full program fee.

While many have tweeted that Boy George has “never looked better,” some publications fear his weight loss has gone too far. 98FM reported on his changed appearance until a title that reads “Boy George fading away.”

What do you think of Boy George’s weight loss before and after photos?