Look out, Sarah Michelle Gellar fans, because your girl might be back on TV. CBS orders a pilot of a new comedy with Robin Williams. 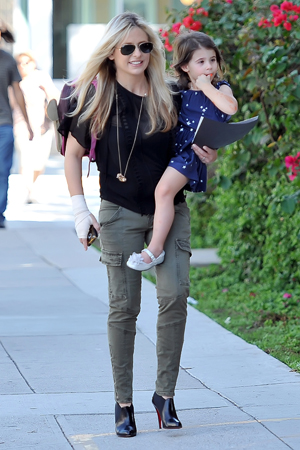 Buffy’s back on TV! Well, sorta: She’s shooting a pedigreed pilot for CBS.

“The Crazy Ones” is being written by David E. Kelley (Boston Legal, Ally McBeal).

Gellar gave a TV comeback the old college try with 2011’s Ringer on the CW, but the show failed to catch fire despite its twisty premise of good/evil twins both played by Gellar, who hasn’t had a television hit since Buffy the Vampire Slayer ended its run in 2003.

Since Gellar was both star and co-producer on the series, she took a hit from Ringer’s cancellation.

On the bright side, Gellar gave birth to her second child, son Rocky James, in September, joining daughter Charlotte Grace, born in 2009. Ringer finished up at the end of September, too, just a few weeks after Rocky was born. Gellar hasn’t been seen on-screen since, though some voice work she’s done for The Simpsons, American Dad and Robot Chicken has aired.

If the CBS pilot gets picked up, it will mark a return for Robin Williams as well. He hasn’t been on television regularly since Mork & Mindy back in the 1980s, though he did show up in a memorable guest role on Louie last year, as himself, with big white whiskers, because of course, everyone “knows that whenever Robin Williams plays a serious role, he sports a beard,” wrote Slate’s Louie recapper hilariously.

On the episode “Barney/Never,” Williams showed up at the same funeral as Louie, and then Louie and Williams went to lunch and a strip club.

He was funny, too. Will he be funny on “The Crazy Ones?” Guess we’ll have to see. Or not, because if CBS doesn’t order a series, we’ll never see it.

“The Crazy Ones” as a title doesn’t bode well, but the pilot is being directed by Jason Winer, who was responsible for the commendable Modern Family pilot, as well as most of the eps from the show’s first season, when it was really good. So maybe this has a shot. Let’s cross things!

Would you like to see Gellar in a comedy as opposed to a drama? Has she got the chops?