After John Mayer and Katy Perry were spotted on Valentine’s Day, tongues are wagging over Perry’s new ruby ring. Did someone just propose? 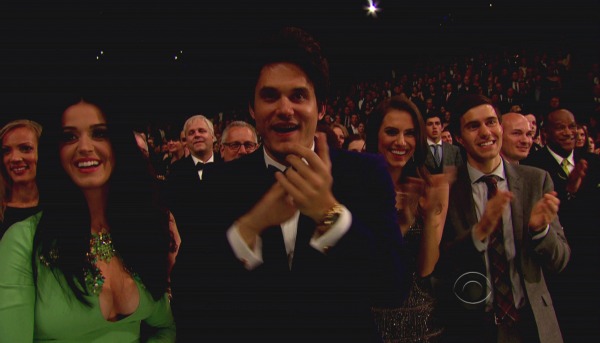 Tongues have been wagging since Valentine’s Day with speculation that John Mayer put a ring on it. So, is Katy Perry engaged to the “Daughters” singer?

According to a People source, the duo are “not engaged.” However, he did put a ring on it, a Valentine’s Day ring.

The rumors began on Thursday night when paparazzi photographed a ruby ring on Perry’s left ring finger as the musical couple were exiting Vicenti, an Italian restaurant in Los Angeles. Since the paps are pretty good at ring-spotting, they knew it was not a familiar one to them.

That’s when the wedding watchers began buzzing until a rep for jewelry designer Daniel Gibbings, a Santa Barbara jeweler, spilled the beans.

The heart-shaped ruby ring is a one-of-a-kind piece created by Gibbings and selected by the Grammy winner for Perry. The ring is set in 20K gold with two emerald stones on either side of the ruby.

According to Gibbings’ website, a similar piece accented with just ruby stones is no longer available, but it was a “price upon request” item. That usually means it is quite expensive.

The rep for the jewelry designer told People that Mayer was “really super nice” while picking out that perfect Valentine’s Day gift. While the ring does not come from the designer’s engagement ring collection, “it can be” used for that purpose.

The rep said, “[Gibbings] uses a lot of texture. The style of his engagement rings are not the usual Neil Lane looking ring. They are definitely more trendy or boho,”

So, don’t save the date for the Perry-Mayer wedding just yet. It looks like is was just a sweet gift from a man to his paramour on the day of love.