Jack and Amanda are in danger when Nate Ryan confronts them on their boat. Only one will make it out alive. 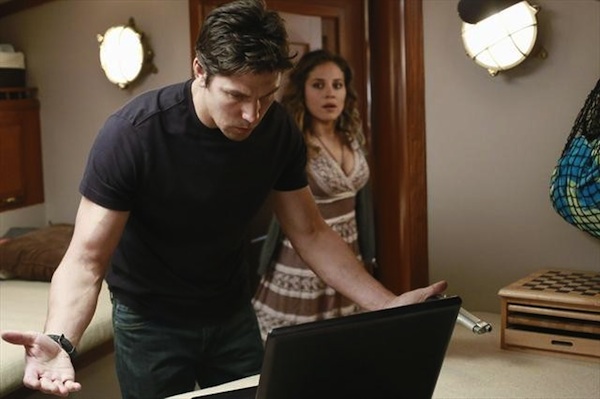 This week’s episode of Revenge is by far the most emotional this season. The happy newlyweds, Jack (talented Nick Wechsler) and Amanda (Margarita Levieva), are enjoying their first few married hours when they discover Nate Ryan has been on the boat the whole time. Things get pretty dangerous and only one will make it out alive.

Emily (stylish Emily VanCamp) and Nolan (Gabriel Mann) realize they haven’t heard from Jack and Amanda, so they get on a speed boat and rush toward Jack’s last known whereabouts. On Jack’s boat, Amanda is trying to convince Nate that she’s not in love with Jack, but marrying him was all part of her plan to stay in the Hamptons and bring down the Greysons. She tries to convince him to partner up with her instead of Conrad. He doesn’t take the deal.

Jack overhears the conversation and uses it as a way to create a distraction. He starts arguing with Amanda about all her lies while Nate goes into the cabin to look for the laptop (the one with all the leverage against Conrad on it).

Kids get cute with Revenge >>

Jack and Amanda lock Nate in the cabin and get the life raft ready. As the two are about to jump in, Nate shoots a few rounds at the lock, but a stray bullet winds up catching Jack in the midsection. Amanda helps him into the boat, but then pushes it away, telling him she loves him. She stays behind to fight Nate so he won’t be able to go after Jack. She’s a tough cookie.

After a few blows, Nate gets the best of her and knocks her out. When she comes to it only takes a minute for Emily to board the boat and take down Nate (Nolan picked up Jack and is rushing him back to land). As Emily and Nate struggle over the gun, a bullet hits the propane tank.

Finally, Emily gets the upperhand, shoots Nate, and forces Amanda to run before the leaking gas causes the boat to explode. But, it’s too late. Nate pulls out a lighter, and with the flick of his thumb Jack’s beloved boat goes up in the flames.

Emily finds Amanda struggling in the water and pulls her into her half-inflated life raft. It takes her a moment to realize that Amanda has been seriously wounded. As she struggles for breath she makes Emily promise to take care of her family. Emily breaks into tears as Amanda dies in her arms.

Two dead and one barely hanging on all because of leverage Emily had over Conrad. This girl has to start to wonder if her sacrifices for the cause are really worth it.