Glenn tries to emerge as the leader while Rick’s dealing with seeing the ghost of his wife, but will he be enough to stop the Governor from taking over the prison? 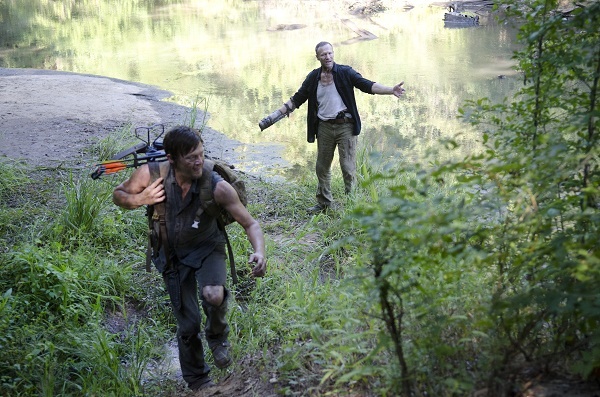 It doesn’t make a lot of sense that Glenn (Steven Yeun), who has legitimately turned into a warrior, is still the underdog among his group. It’s almost as if Carl is more respected than the soft-spoken Glenn. But now that Daryl (Norman Reedus) is gone and Rick (the dark Andrew Lincoln) is full-blown crazy, Glenn tries to emerge as the leader. However, it’s clear no one else looks at him that way.

Glenn’s concerned the Governor will come hunting for them, so he makes plans to defend the prison. As Glenn steps up it quickly becomes clear that Hershel doesn’t believe in him. It seems he thinks a ghost-seeing, screaming, wandering aimlessly in the field Rick is still a better leader than Glenn. Hershel tells Rick he needs to get it together because Glenn will never be the kind of leader he is.

Daryl finally has enough of his brother when they save a group of stragglers and Merle (Michael Rooker) then tries to jack their stuff. Daryl takes his trusty crossbow and heads back toward his real family at the prison. Merle puts on his best puppy dog face, saying he can’t go with him because he tried to kill too many of Daryl’s friends. In a moment of personal victory, Daryl moves on without him.

It’s a good thing Daryl suddenly has that change of heart, because they sure could use his help at the prison. The Governor does move in for the kill, just like Glenn anticipated. He shoots Axel in the forehead and one of his minions unleashes a car full of zombies in the prison yard.

The Walking Dead is a ratings monster >>

Rick suddenly snaps out of crazy mode and starts popping off zombies one by one. Maggie comes out of her isolated funk to save Carol, who’s pinned to the ground. And, just when it looks like it can’t get any worse, Daryl arrives with his big brother just a few steps behind and helps secure the victory.

The Governor disappears into the woods like the coward he is and will probably return to Andrea (the clueless Laurie Holden) with more lies that she’ll buy because she really wants to believe Woodbury is the answer and not a creepy, zombie free cult.

The slow zoom into Rick’s crazy eyes of death during the lost shot of the episode leads me to believe Woodbury won’t be left a quiet town for long.