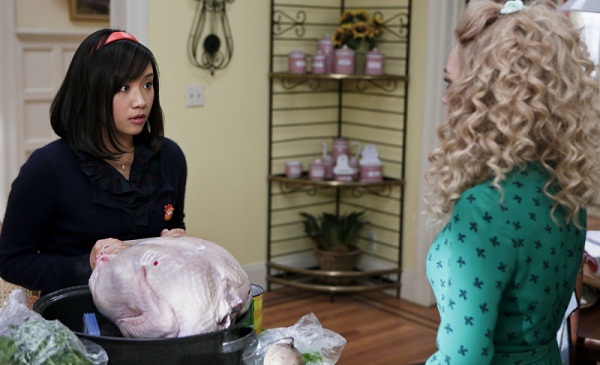 It’s Thanksgiving time in Connecticut! This will be the first major holiday since the Bradshaws lost their mom/wife earlier in the year. Carrie (AnnaSophia Robb) is bound and determined to make the day go smoothly and carry on with her mother’s favorite traditions. However, like all things Carrie tries… it looks like hardly anything will go according to plan. Poor girl!

As you may have seen in all the previews, the dinner table will expand. It looks like in her drive to overachieve, Carrie invited her new, posh boyfriend, George, and his father, Harlan. (Harlan also happens to be one of Carrie’s dad’s old friends.) But, when dinner is served, is that really who will end up at the table? Check out this picture we found… 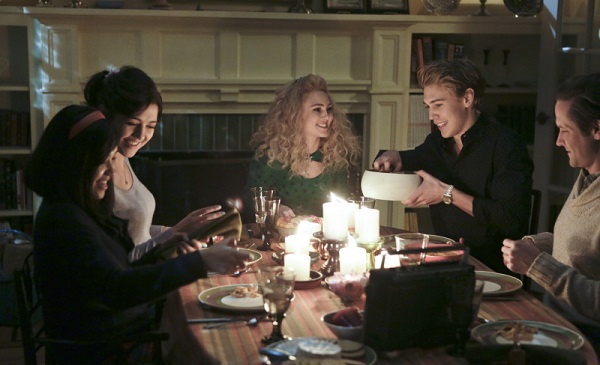 How did Sophia Robb end up earning her role as Carrie? >>

With all those expected (and unexpected) guests, Carrie has a lot of mouths to feed and expectations to meet. Will putting on her mother’s favorite apron help her pull off a fabulous Thanksgiving feast? Probably not. It looks like setting Carrie loose in the kitchen will be pretty reminiscent of the phrase “a bull in a china shop.” Everything is a mess! Not only does one of the oven racks collapse, but she also sets the turkey on fire. Eek! Her best friend, Mouse, even comes to try to help. It may be no use, though.

While Mouse is helping Carrie, Maggie is on her own at Walt’s house for the holiday. According to The CW, she’s in for a deep look at some of her life choices when the family’s conversation turns to college. Suddenly, Maggie realizes she hasn’t been taking the college search seriously enough.

How will Thanksgiving turn out, and will Sebastian be at the dinner table instead of George? What about Maggie? Will she be able to get her act together in time to go to college? And, seriously, why is Walt with her, again? He’s gay, right?

Looks like we’ll have to tune in to find out. The Carrie Diaries airs Mondays at 8/7c on The CW.

Last week on The Carrie Diaries >>