The dad-to-be (again) is apparently undergoing sympathy pains for his pregnant wife. 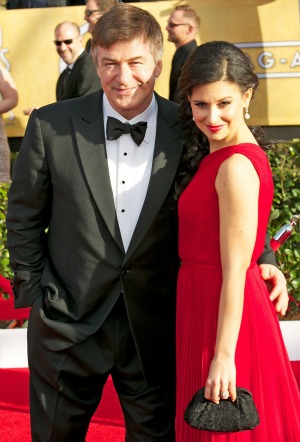 Alec Baldwin is about to become a dad again at the age of 54. His new bride, Hilaria Thomas, is expecting their first child together this summer. For the actor, the pregnancy is not completely pain-free.

“My boobs hurt. My boobs are killing me, so sore,” Baldwin told Extra. “My jeans don’t fit. My pants, I can’t buckle them.”

He also said that his wife has been experiencing extreme cravings (something he hasn’t been going through).

“She was eating troughs of pineapple,” he said, according to People. “I mean like tanker containers of pineapple.”

Thomas added, “I didn’t eat pineapple before. It was bizarre. I really wanted pineapple.”

And while Baldwin’s series 30 Rock recently ended, he isn’t out of work — he’s busy with multiple projects. But he said what he really wants is to be a stay-at-home dad.

“My dream is to be home with the baby, standing in the doorway, saying goodbye to Mommy,” he said. “‘Mommy is going to work now. Bye Mommy… don’t work too hard!'”

(Ironically, that was a theme on the last episode of 30 Rock.)

The couple has not found out whether they will be having a son or daughter, but for Baldwin and Thomas, either is okay. She hints at more babies in the future.

“I want to have at least one of each, so whatever this is going to be, I want to have the next one [be the opposite sex],” she said, according to People.

Baldwin already has one daughter, Ireland, with ex-wife Kim Basinger. Thomas is 26 years younger than Baldwin, meaning they have plenty of baby-making time left, so there may be a chance for more than two if the couple decides on it. Let’s just hope there is enough pineapple to get them through.