With the best opening of 2013 so far, Oz followed the yellow brick road to $80 million at the box office. James Franco stars in this 3D fantasy adventure and is already rumored to be in talks for a sequel to this Wizard of Oz prequel. 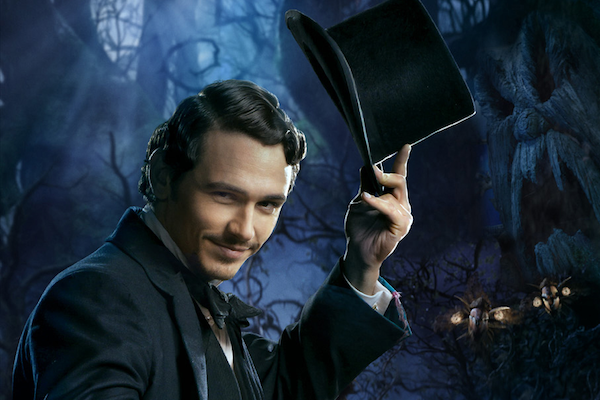 Disney is over the rainbow today with reports that thier 3D Oz movie made $80 million this weekend. The buzz in Hollywood is that a sequel to this prequel is in the works.

Though in second place, it’s a very, very distant second. Seems the giants were no match for the wicked witches of Oz, since Jack only brought in $10 million for a two-week total of $43 million.

This comedy starring Jason Bateman and Melissa McCarthy is still conning audiences five weeks after its release. It stole $6 million this weekend, bringing its total to $116 million.

This dark revenge film features Colin Farrell and Noomi Rapace as two broken people lusting for payback from the men who ruined their lives. It earned $5 million seeking justice at the box office.

Ugh, teenagers — they seem to live for trouble. In this movie, Dwayne Johnson plays a dad who has to infiltrate a drug cartel to rescue his son. This Snitch earned $5 million for tattling.

All college kids love a good party, and turning 21 usually means getting crazy drunk. This hilarious cautionary tale puked up $5 million this weekend.

Still sparking at the box office, this Nicholas Sparks romance/mystery starring Josh Duhamel and Julianne Hough fell in love with its audience for adding another $3.8 million to its $62 million total.

Bradley Cooper and Jennifer Lawrence play one kooky couple in this love story with a gold lining. The last of the Oscar films to hang around, it earned another $3.7 million this weekend.

This reverse alien pic sends a UFO to Earth where a trip to a 7-11 becomes as strange as a jaunt to Uranus. It added over $3 million worth of asteroids to its bounty.

Who doesn’t love a good exorcism? The lovely Ashley Bell plays a gal with a devil inside in this freaky film that cast out another $3 million. Take that, demon!