The first season of PBS phenom Downton Abbey launched Maggie Smith as a pop culture icon. But in a television interview, Smith admits she’s never, ever watched the show. 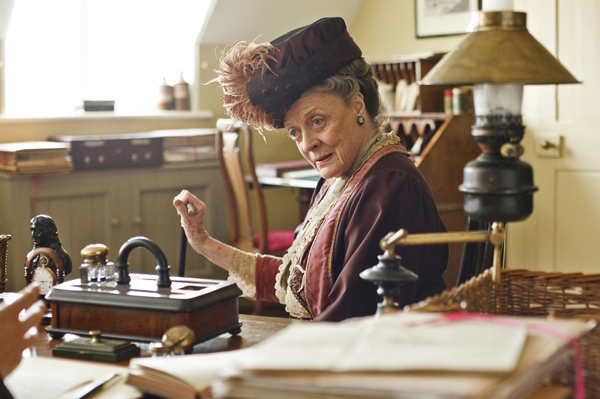 But wait, what does Maggie Smith talk to people about on Monday mornings?

The 78-year-old actress, hugely popular internationally due to her role as the Dowager Countess of Grantham tells 60 Minutes that she doesn’t watch Downton Abbey. Not on Sunday nights when it airs, not ever.

“I don’t sit down and watch it,” Us Weekly reports that Smith tells longtime 60 Minutes correspondent Steve Kroft, who asks “Never?”

“No, I haven’t watched it,” Smith returns.

Kroft is amazed. She is probably “the only person in England who’s not watching.”

“And possibly in America,” Us Weekly notes, since the Jan. 6 third-season premiere of Downton Abbey was the highest-rated drama ever to air on PBS, with an astonishing 7.9 million viewers — even better than the Season 2 finale.

“I will look at it when it’s all over, maybe,” Smith told 60 Minutes. “Because it’s frustrating — I always see things that I would like to do differently and think, ‘Oh, why in the name of God did I do that?'”

Smith’s not dissing Downton, she just doesn’t want to watch herself on-screen. She’s not alone there. As previously reported, Harry Potter compadre Daniel Radcliffe said recently he could only bear to re-watch himself in one out of the six Harry Potter movies.

Robert Pattinson told GQ in 2009 that he was so freaked out by watching himself on-screen that he left the Twilight premiere (and abandoned his mom sitting in the theater!) to go have a panic attack in his car.

Reese Witherspoon told Chelsea Lately in 2010, “I can’t watch myself. I don’t know who feels good looking at themselves. Nobody, right? It’s torture. Why would you want to watch yourself being stupid and pretending to be somebody else?”

Maggie Smith also told 60 Minutes she doesn’t particularly need to feel like a big-shot star: “I don’t feel any different to the way I felt before, and I’m not quite sure what [being a star] means,” Us Weekly quotes her as telling Kroft. “I am familiar to people now, which is what I was not before. That is entirely due to the television set.”

Before Downton Abbey, Smith’s most famous roles were in the Harry Potter films (she’s the crisp, tart Professor McGonagall) and in 2001’s Gosford Park, which was written by Downton’s creator Julian Fellowes and has a similar Upstairs, Downstairs theme.