The ex-boyfriend of the model allegedly killed by Oscar Pistorius says he wants the Olympian to serve hard time as the athlete appeared in court today. 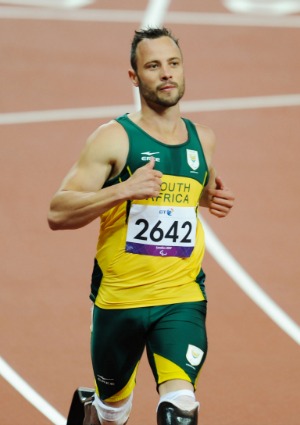 Oscar Pistorius was in court today, facing charges of premeditated murder in the shooting death of his girlfriend Reeva Steenkamp — and the model’s former lover says he hopes the Olympian does hard time.

DJ and bar manager Alan Taylor dated Steenkamp for six months while the model was a law student and described her as a “very intelligent, beautiful person, easy on the eye as well as an amazing character.”

“She is absolutely everything everyone says she is, and more, and the world is definitely a worse place without her,” Taylor told the Daily Mail.

“She touched many lives and was headed for stardom. It makes me sad that someone took away someone so special, so young.”

“I’ve always regretted the way we broke up, but we did stay in touch and she helped me through a very difficult time before I left South Africa,” he said.

Taylor’s loving tribute to Steenkamp turned frigid when the talk turned to her alleged killer.

“I sincerely, with all my heart, hope justice is served long, hard and ice cold (in one of the worst prisons in the world),” he said.

Pistorius appeared in Pretoria Magistrates Court this morning to answer the charge of one count of murder, which his family said he denies “in the strongest terms.” Prosecutors say they plan to argue premeditation, which carries a mandatory life term — an announcement that caused the Olympian to slump forward in tears.

South Africa media reports say security guards at Pistorius’ estate found the athlete near Steenkamp’s body and it appeared she had been shot through the bathroom door four times.

The Pistorius family and management team issued a statement to press, reading, “Firstly, and most importantly, all our thoughts today must be with the family and friends of Reeva Steenkamp.”

“Oscar Pistorius has appeared in court here in Pretoria this morning formally charged with the murder of Reeva Steenkamp. The alleged murder is disputed in the strongest terms.”

“Oscar Pistorius has made history as an Olympic and Paralympic sportsman and has been an inspiration to others the world over. He has made it very clear that he would like to send his deepest sympathies to the family of Reeva.”

“He would also like to express his thanks through us today for all the messages of support he has received — but as stated our thoughts and prayers today should be for Reeva and her family, regardless of the circumstances of this terrible, terrible tragedy.”