Flowers? Candy? Nuh-uh, not good enough for the woman who’s bearing Kanye West’s baby. He went shopping in Cartier instead. 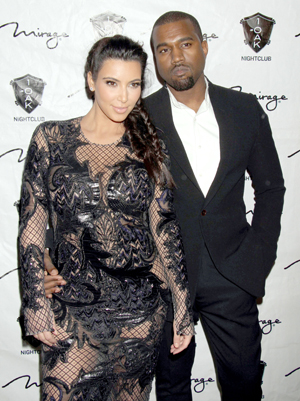 When it comes to giving gifts, Kanye West goes big: For Valentine’s Day, he gave Kim Kardashian a Cartier cuff that costs a cool $69,800, tooFab reports. Guess Kanye appreciates that whole “having his baby” thing.

The black fabric cuff is ornamented by a white gold and diamond panther with emerald eyes and an onyx nose.

So we’re starting to get the impression that Kardashian likes jewelry…and calls her man “The Don.” Huh.

West has made headlines for his extravagance before: For Jay-Z’s first ever Father’s Day, Kanye gifted a $34,000 golden skull.

A golden skull? Yeah. A golden skull. Specifically the Lions & Sons’ Divora Skull set with red topaz. But West didn’t just put the skull in a UPS box. He had a courier hand-deliver it on a private jet.

HipHollywood.com reported that Kardashian got the same skull, engraved with “KKW” (for Kim Kardashian West?).

West and Kardashian together have been on something of a tear financially for the past few months: They bought an $11 million mansion in a gated community in Bel Air, California, while Kardashian bought West a birthday Lamborghini that cost a cool three quarters of a million dollars.

So did your Valentine’s Day measure up to Kim and Kanye’s?