A Mother Monster always has time for her fans… even when she feels awful. 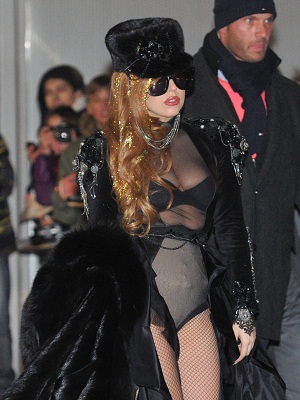 When Lady Gaga had to cancel her concert due to a serious hip injury, one little monster thought she’d missed her chance to see her idol. Luckily for her, Mother Monster’s heart is pretty big.

Five-year-old Kayleigh Gurbynski suffers from a hypoplastic heart and Turner’s Syndrome. The parents of the little girl with the terminal condition drove her from her home in Wisconsin to the big, bright city of Chicago so she could see her favorite singer perform. She even lucked out with front-row seats! But, when Lady G. canceled her show, Kayleigh’s big musical dream seemed to have come to an end.

Enter Tony Waitekus, a local radio host who knew about Kayleigh’s visit. He got ahold of Lady Gaga‘s management and promotional teams and told them of Gaga’s sick little fan. Hip injury or not, Lady G. is incredibly devoted to her fans and nothing could keep the glam pop queen away from Kayleigh’s side.

Waitekus documented the moment on his Facebook page, saying, “Even though Lady Gaga was not well enough to do the show tonight due to Doctor’s orders (suffering from joint pain), Lady Gaga made it a point of still meeting Kayleigh and my hats off to Lady Gaga and her people for making this happen!”

As we now know, days later her tour promoter, Live Nation, announced that Lady Gaga’s tour would be completely canceled. Lady G.’s hip is in a far worse state than originally thought and will need surgery.

How many jobs will be lost from Lady Gaga’s canceled tour? >>

“After additional tests this morning to review the severity of the issue, it has been determined that Lady Gaga has a labral tear of the right hip,” Live Nation said in a statement. “She will need surgery to repair the problem, followed by strict down time to recover. This unfortunately, will force her to cancel the tour so she can heal.”

Poor Monsters! But at least Kayleigh got her chance to bask in Mother Monster’s glory for a brief moment.