As if things haven’t been complicated and crazy enough for our favorite group of immortals, Klaus reveals a secret that will change everything. 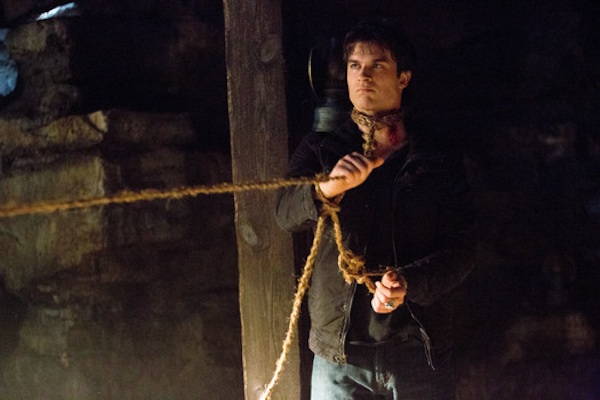 Holy goodness, things just got real for the Mystic Falls gang! Aside from being an episode heavy with neck breaks, some very important information is revealed. A secret that Klaus was been hiding changes the game for everyone, or ups the “stakes,” if you’re in the mood for a little vampire pun.

First things first, everyone and their mother knows better than to trust Klaus (Joseph Morgan) and Shane so it does seem a little naive of our immortals to jump ship to Nova Scotia without doing any real investigating. During a phone call with Klaus, Rebekah (Claire Holt) learns that there is only one dose of the cure and she’d better get to it first. Caroline (Candice Accola) and Tyler (Michael Trevino) are standing by and try to hang up the phone, but Rebekah’s already heard the news. And there goes the truce she just made with all the other vampires.

Rebekah actually tries to be nice for half a second and passes the information along to Stefan. But when Stefan says he’d only give the cure to Elena (get Nina Dobrev’s cute up-do), Rebekah resorts to her old ways and breaks his neck.

Plans for the cure

Damon (super-hot Ian Somerhalder) is still alive after being attacked by Vaughn, one of the five hunters. Vaughn captures Damon and after a full-blown assault with grenade stakes on Rebekah, Damon finally gets free and Vaughn takes off. But he won’t be gone long. He knows about the one-dose situation too, and he wants to pour it down Silas’ throat since it’s the only way to kill him.

But now, Stefan (Baytown Outlaw Paul Wesley) and Elena (who are alive and well despite suffering Rebekah’s wrath) have decided that they want to get the cure and give it to Klaus before he can go on a murdering rampage. It’s not like Elena will ever be her old self again anyway. Not after drinking bags of blood and slaying hunters.

Vaughn is really serious about raising Silas, so when it seems like Bonnie isn’t quite getting it done, he stabs her. When Jeremy tries to help Bonnie, Katherine gets involved and forces Jeremy to feed Silas. Then, she takes off with the cure and Silas snaps Jeremy’s neck. Nice way to repay someone for freeing you from your eternal grave!

Let’s not forget about the tearful goodbye between Caroline and Tyler. Klaus agrees to let Tyler live (since he’s so in love with Caroline), but he’d better start running for the hills. The immortal couple hold out hope that they’ll reunite again someday, but Caroline still tells him to live a happy life without her. That selflessness is why we love her, isn’t it?

We do need to be concerned about Jeremy since he’s still mortal and can’t bounce back from a broken neck like the rest. But let’s remember: They don’t call it “Mystic” Falls for nothing. Anything can happen.