Cat and Vinnie sittin’ on the roof! Could she be anymore aloof? 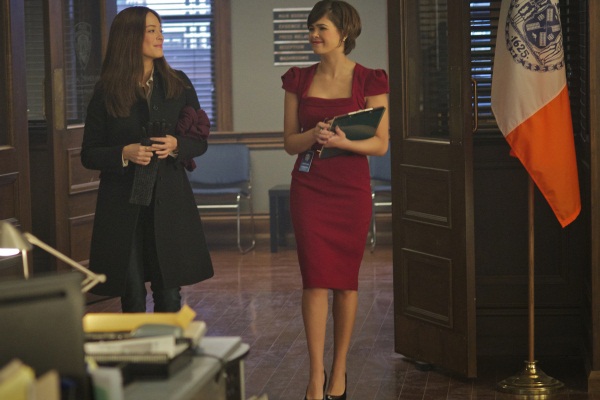 All right. I know I said that if Cat (Kristin Kreuk) forgave the oh-so-freakin’-dreamy Vincent (Jay Ryan) in the very next episode that I’d pretty much never forgive her. I take that back. Here’s why in two words: Flash mob.

I guess I wasn’t being very realistic anyway. Is a flash mob even necessary to make you want to kiss a guy who looks like Vincent? He may be a beast, but he’s a beautiful and sexy beast. Plus, who doesn’t want her man to get a little wild for her once in a while, right?

I’m getting way ahead of myself, though. Let’s roll back to the beginning…

In an attempt to help keep Vincent off the Muirfield radar, Cat gives Alex, Vincent’s ex-girlfriend, some cash and a burner phone and tells her to get the heck out of dodge (except she says it all very nicely which must have taken lot of willpower).

Unfortunately, the ginger decides she wants to somehow help. She spills everything to a journalist friend so he can research Muirfield. As soon as he starts tracking them, they’re onto him. He turns up dead in his apartment. When Cat checks his phone, she sees Alex’s number. 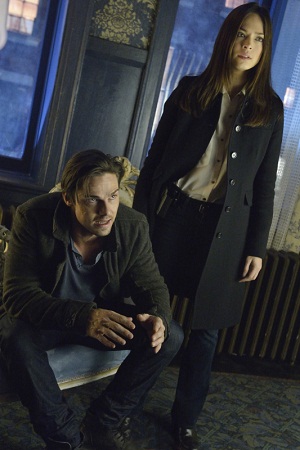 Meanwhile, Muirfield sends someone (Evan’s fake girlfriend) after Alex and she convinces her that they have the antidote to help Vincent return to normal. Alex lures him to a hotel room to administer some sort of drug so Muirfield can kidnap him. He leaves a message with his BFF, who calls Cat, who immediately runs to Vincent’s rescue. It takes some doing but, at the very last minute, they flee the scene.

This time, they finally manage to send Alex on her way. However, in her final scene, we see a creeper dude (no doubt a Muirfield agent) sitting behind her on the bus. Ugh. I’m so over her damsel in distress crap!

We also see Evan’s fake girlfriend again when she shows up to take pictures of his work on Vincent’s DNA. Evan confronts her and within a few moments, she’s got him hooked into working for them… unless he wants to wind up dead.

TV ratings: Did Beauty and the Beast have a pretty debut? >>

It’s Valentine’s Day even for Beauty and the Beast and Vincent is bound and determined to have a real, romantic V-Day with Cat. Roses don’t work. Chocolates don’t work. The flash mob… it works, but she bucks up and pretends it doesn’t.

Just before leaving work, Cat runs into Tess in the evidence room and Cat’s suspicious behavior makes Tess decide to apply for a new partner. By the time Cat returns home after a long, hard day, she’s at her wits’ end.

Vincent is there with another apology and another explanation of how he has always loved Cat, and that he was just drawn to Alex’s promise of a future free from worry. It takes a little bit of sulking from Vincent’s puppy eyes, but soon Cat and Vincent lock lips.

That is until Cat’s sister stumbles upon them and ruins the moment. She’s kind of annoying, right?

More Beauty and the Beast recaps