Famous wedding crashers Owen Wilson and Vince Vaughn have signed up for The Internship. It’s a fish-out-of-water comedy that takes them inside the world of technology. 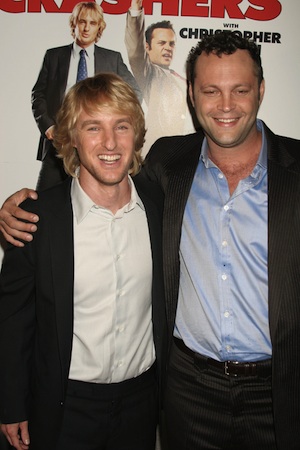 Vince Vaughn and Owen Wilson are together again. This summer, the duo will appear in the new comedy The Internship. It will pit the funny 40-somethings against young tech geniuses. Think The Social Network meets Old School (another film Vaughn starred in).

This week, Fox released the first trailer for the movie, which centers on Nick and Billy. They’re two salespeople who find themselves out of work when their company goes under. In a world where computers are king, they apply for and receive an internship at Google.

They’re immediately thrown into an arena with the nation’s most sought-after minds. How will they compete with that? The plot seems pretty straightforward. They’re fishes out of water who are desperate to earn the respect of their colleagues.

Even though they lack the necessary educational background, their desire and hijinks will pull them through. The trailer’s chocked full of gags that play off their ignorance of geek culture. Prepare yourself for lots of sci-fi and comic book references, paired with slapstick comedy.

Before Judd Apatow’s crew of actors — which includes James Franco, Seth Rogen, Jonah Hill and Jason Segel — took over the comedy scene, Wilson and Vaughn were top dog. Thier 2005 film Wedding Crashers was a summer blockbuster that grossed over $285 million worldwide.

Check out the first trailer for The Internship

The Internship opens in theaters June 7.

Do you think The Internship can deliver the laughs?