The official video for Justin Timberlake’s “Suit & Tie” single was released on Thursday. It’s a throwback to the Rat Pack era with a dash of JT swagger. 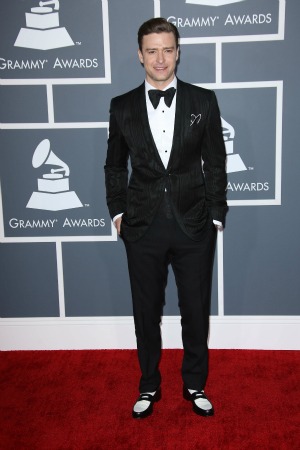 It’s a Valentine’s Day treat for all of the Justin Timberlake fans out there. The triple-threat performer finally released the music video for his single “Suit & Tie.”

Timberlake must have loved working with his Social Network director because David Fincher helms the black-and-white video that’s a throwback to the Rat Pack era. In fact, Timberlake’s performance at the Grammys on Sunday night was just a hint of what was to come with this week’s music video release.

The singer cued up the video’s debut with a perfectly timed afternoon tweet: “Here it is… All pressed up in black and white. Enjoy!”

Within minutes, the video had been retweeted and favorited on the social media site thousands of times.

Fans will be thrilled to see JT’s classic moves on the dance floor and a cameo by Jay-Z, who is featured in the single. Not only does Timberlake eat a bowl of cereal, but Jay-Z hits the couch for a little TV time before they don their “Suit & Tie.”

After a six-year absence from the music scene, Timberlake has hit every big event in the last few weeks promoting his music. He was seen singing at a pre–Super Bowl event, he performed at the Grammys and the singer even hinted at a tour with Jay-Z.

He told the New York Post on Sunday, “We’re definitely going to go on tour… I don’t know how much I should say… It’s going to be a lot of fun.”

To add to the excitement, Timberlake’s album, The 20/20 Experience, will drop on March 19.

Enjoy your Valentine’s Day with a little sexy swagger from Justin Timberlake.