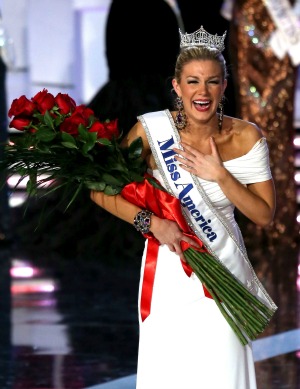 What’s old is new again and that’s exactly what’s happening with Miss America. After seven years in Las Vegas, the pageant is heading back to its roots in Atlantic City, New Jersey.

On Thursday, New Jersey Lieutenant Governor Kim Guadagno announced a three-year deal with the Miss America pageant. The move would return the show to its birthplace where it all began over 93 years ago.

In an interview with WPG 1450AM radio station, Guadagno said, “Some people think Atlantic City was closed and devastated by Superstorm Sandy.” This partnership will let people know that the city is “open for business.”

A look behind the Miss America Crown >>

Even though the announcement was made, there are still a few details to be attended to and organizers were quick to point that out.

The Lt. Gov. cautioned, “It’s a deal… But it’s still not in writing. It’s a handshake. We haven’t crossed all the T’s or dotted all the I’s… But we’re so confident that we’ll see Miss America the pageant here in just seven moths that we didn’t want to miss an opportunity to announce it to you.”

Another interesting point of the deal is moving the pageant back to its original September date. While the show has been in Vegas, it has been held in January at the Planet Hollywood Las Vegas Resort and Casino. The deal also returns the show to network television on ABC versus a variety of cable channels the pageant has called home for the last several years.

To lure pageant officials back to the East Coast state, there were financial incentives brought to the table, but not at the taxpayers’ cost. The governor’s office is hoping that the pageant will bring as much as $30 million back to the state and Atlantic City.

Sam Haskell III, the Miss America Organizations’ chairman of the board, said in a statement, “We are so very proud to bring Miss America back to her birthplace in Atlantic City. We are grateful to Governor Christie and his staff for helping make this possible.”

Hopefully, everything will be finalized by the end of this month, but this does bring up one big question. Will Miss America 2013, Mallory Hytes Hagan, be shortchanged with only a seven-month reign?

With state officials hoping for a September 2013 return, it’s entirely possible that Hagan will be one of the shortest-reigning Miss Americas in history.