A look into Pierce’s haunted mansion and the room with the swing. 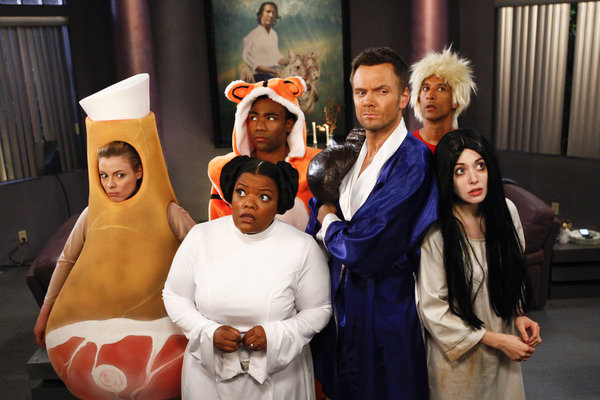 Due to the late start for Community, the Halloween episode will air tonight… on Valentine’s Day! That means awesome costumes and a little bit of spook.

Somehow, Pierce (Chevy Chase, who is finishing his last season with the show) manages to lock himself in his panic room. When he calls the gang for help, they stop by his place on their way to a party. Pierce’s mansion is super-spookily decorated and, like all things involving Pierce, the rescue becomes more complicated than it should have been. The code to unlock the panic room is in a book somewhere in Pierce’s home. As the study groups combs his house, there’s a surprise in every room.

Seriously. Pierce even has a room with a swing in it and a bunch of collars. According to Troy (Donald Glover), that can only mean one thing: Secret dogs! Watch…

As for the costumes: Expect awesome. You’ll see a boxer, a tiger, a chicken leg (right?), Princess Leia and that creepy chick from The Ring, among others. Technically, Annie was supposed to be Jeff’s “ring girl,” one of the hot girls who hang out near the boxing ring. However, they got their wires crossed.

We’re seeing a lot of off-season holidays from the mid-season shows right now. In the coming episode of The Carrie Diaries, Carrie will make Thanksgiving dinner for her boyfriend’s mother. Do the mixed-up holidays make things more fun? Or do they just serve as another reminder of how the networks made us wait three or four extra months for our favorite shows?