Actress Jenny McCarthy stands in solidarity with famous cousin Melissa McCarthy, who was roundly insulted by critic Rex Reed in a scathing review of her latest film, Identity Thief. 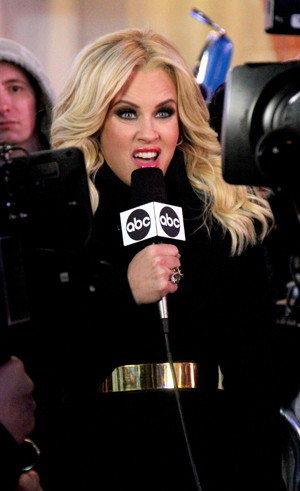 Jenny McCarthy has a few choice words for critic Rex Reed, who called cousin Melissa McCarthy a “female hippo” in the New York Observer: “He can go to hell.”

Jenny McCarthy, and many other Melissa McCarthy lovers both famous and non, are hopping mad over Reed’s review of the film Identity Thief, in which Reed ranged beyond criticism of the movie to take several potshots at Melissa’s weight.

McCarthy is “tractor-sized,” and a “gimmick comedian who has devoted her short career to being obese and obnoxious with equal success.”

Ummmm, the people who watched McCarthy light up the small screen for seven years on Gilmore Girls before breaking out cinematically in Bridesmaids would want to argue with that “short career” thing.

“She’s very, very talented and people know that, so… He can go to hell.” Jenny McCarthy told E! News.

Jenny McCarthy isn’t the first to speak up for Melissa. Biggest Loser trainer Jillian Michaels told Entertainment Tonight that Reed’s hurtful remarks were “evil. It’s just plain cruelty, and it’s unnecessary. That kind of prejudice is wrong in every possible way. I’m here to say when you do things like that, it’s spreading harm and it’s hurtful and it’s prejudice.”

Reed defended himself Monday in a radio interview in New York, theorizing that “the big publicity machine called Universal Pictures” is using his review as a publicity stunt to “sell tickets to a bad movie.”

About Melissa McCarthy, who has publicly said she wishes she were smaller but tries to accept herself proudly as she is, Reed said, “She is crying all the way to the bank.”

Nonetheless, Reed did concede that Melissa McCarthy has “remained completely silent” on the furor and he thinks that’s “completely classy.”