A twisted tale of revenge, Erin Kelly’s third psychological thriller will keep you up late into the night, which is why it’s our Red Hot Book of the Week. 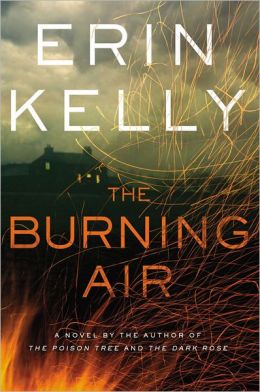 Murderers and serial killers are scary. No one disputes that. But what can be even more chilling is the thought that goes into these crimes, the knowledge that they aren’t the actions of someone desperate with nowhere else to turn. No, the worst is when they are well thought out and perfectly executed, telling us that someone truly wants to inflict damage and pain. That’s the premise of Erin Kelly’s disturbing psychological thriller The Burning Air.

The Burning Air stars out innocently enough. It tells the story of the MacBride family, a well-to-do British family who have gathered at their secluded country house to say goodbye to their matriarch, Lydia, and spread her ashes. It seems to be the simple story of a couple having difficulties and a mother suffering from postpartum depression — interesting enough in its own right but relatively straightforward. But as strange things start happening and the novel takes a shocking turn, the reader begins to understand that there is nothing simple about The Burning Air.

Kelly then takes the reader on a flashback to tell the story of Darcy Kellaway, a boy who has been homeschooled by his mother for his entire life. As a result, she has made him utterly dependent on her and ensured that he hasn’t been properly socialized. At the instruction of his mother, Darcy applies to a prestigious private school where Rowan MacBride, the patriarch of the MacBride family, holds Darcy’s admission decision in his hands. Rowan decides to award the scholarship to another student and turns down Darcy’s application.

And so begins a twisted, chilling tale of revenge. Darcy is convinced that the MacBrides are intent on ruining his life and that they purposefully denied him his one chance at greatness out of selfishness and spite. His delusions are as scary as his intellect and drive, and the long view he has of revenge is shocking, to say the least. This book will keep readers up late into the night, riveted by Darcy’s scheme and hoping against hope that the MacBride family will emerge unscathed from his horrible machinations.