Hold on to your stomachs, Ke$ha fans! We now know why the pop star is fond of brushing her teeth with a bottle of Jack. 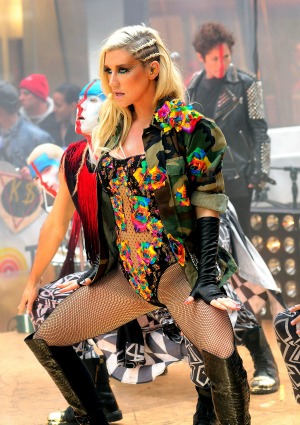 Pop star Ke$ha’s upcoming documentary promises to be quite the sight. There’s a strong chance the project, titled Ke$ha: My Crazy Beautiful Life, will only live up to half of its name.

The “Die Young” singer is promoting her docu-series by promising fans who tune in they’ll have the chance to watch her guzzle her own urine — willingly, purposefully and not just a tiny sip!

Hold up! Back to that pee drinking for a minute. The 25-year-old, pictured here performing on Today in November, elaborated, “I was told drinking my own pee was good.”

While we’re pretty sure it’s milk, not urine, that goes by the does-a-body-good slogan, the Warrior singer was willing to fight for her right to drink her own waste.

“Somebody tried to take my pee away from me and I said, ‘That is mine!'” she added. “So I snatched it up and took a chug and it was really gross so I don’t do it anymore.”

Not surprisingly, Ke$ha sometimes catches flack from those around her. How often does she get told she’s amazing?

“Not enough!” she said. She went on: “My fans are amazing to me, but usually the people around me say, ‘You’re disgusting!’ or, ‘Put your pants on!’ or, ‘You’re late!’ Or they say, ‘You smell weird, what’s that smell?’ I smell like a hobo. One time, someone told me I smelt like a shrimp on a diaper. I thought I could make a fragrance that was little like a shrimp on a Fabergé diaper, but I don’t know if people want to smell like that.”

Ke$ha has a memoir coming, and it’s illustrated >>

Ke$ha: My Crazy Beautiful Life is a miniseries that will consist of six half-hour episodes following the singer’s two-year journey from nobody to pee-drinking household name. The crazy is set to air in April.

Will you be watching Ke$ha drink her own urine?