Solange Knowles knows how to grab the camera’s attention. When she showed up at big sister Beyoncé’s documentary-screening party, the young singer went pants-free! 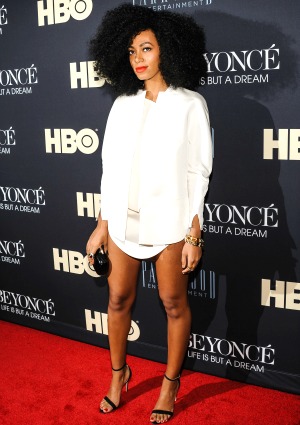 Check out Solange Knowles’ pants-free look at the official New York screening of her sister’s documentary, Beyoncé: Life Is but a Dream. There was a whole lot of leg happening Tuesday night at the Ziegfeld Theatre!

Pairing what looked to be a man’s dress shirt with open-toe, ankle-strap heels and not much else, Solange Knowles is said to have upstaged Beyoncé’s own stroll down the red carpet.

Admitting to Oprah Winfrey she’s nervous about sharing so much of her life with the HBO-viewing public, Beyoncé said in a pretaped interview, “I woke up this morning and thought, ‘What did I do?'”

Oprah gushed of Beyoncé’s documentary work in return, saying, “She did an amazing job. People are going to be amazed… People are going to feel a connection to her that they didn’t feel before because she shows us how real she is. She understands that all pain is the same. The way she hurts is the same way other people have hurt.”

Love-fest alert! In a video of the premiere after-party, it appears Solange Knowles had a momentary wardrobe malfunction when her white top popped open, revealing a black bra underneath. The 26-year-old handled it in stride, putting her top back together without missing a beat.

Are you a fan of Solange Knowles’ no-pants look?