Nicknamed the godfather of prison by friends, O.J. Simpson throws the best Super Bowl party for a few of his closest inmate pals. 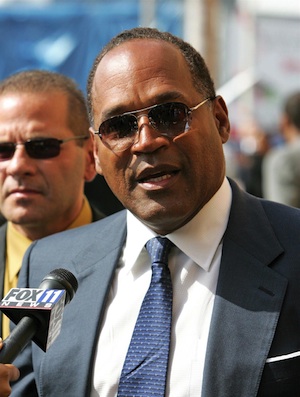 O.J. Simpson is a popular guy in prison.

Simpson — who is locked up in Nevada for over 30 years — flexed those popularity muscles by throwing the best Super Bowl prison party ever. Simpson even joined in on the consumer tradition to upgrade the television in his cell for the big game between the Baltimore Ravens and San Francisco 49ers. (Spoiler alert: The Ravens won.)

The Super Bowl was Feb. 4, 2013, and reports are just now surfacing that O.J. Simpson decided to throw a Super Bowl party with several of his closest inmate friends. Probably tough to get an invitation.

The New York Post explained just how Simpson managed to catch the game, prison style. “If you have the money, you can buy a TV at the inmate store and put it in your cell,” said Norman Prado, a close friend of O.J. Simpson. And obviously Simpson had no trouble arranging the Super Bowl bash. “He’s like the Godfather of prison now,” explained Prado.

Just how close are the Kardashians to O.J. Simpson? >>

O.J. Simpson made his NFL debut in 1969 and had a stellar 10-year career; his last season was with the San Francisco 49ers in 1979. In 1995 he was acquitted of charges for the murder of his ex-wife, Nicole Brown, and her alleged boyfriend Ron Goldman. In 2008, Simpson was found guilty of armed robbery and kidnapping, along with other felonies, and sentenced to 33 years in prison.

While O.J. Simpson won numerous football awards through his career, including the Heisman Trophy in 1968, he never played in a Super Bowl.