It was surreal to watch the premiere episode of The Face last night in my living room. These are my thoughts… 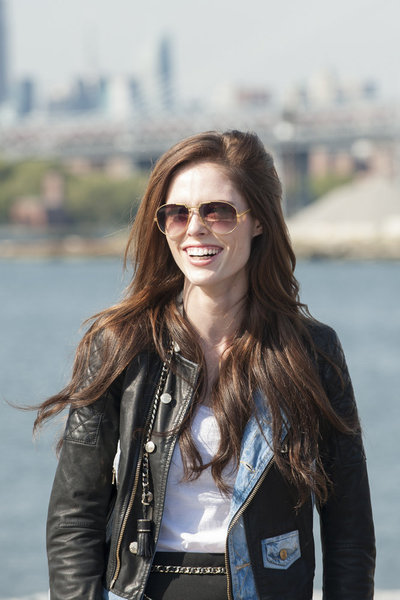 All I could think about on Tuesday night’s premiere episode of The Face was the behind-the-scenes action that they didn’t show. I just remember when I was the first one who walked into the loft, and I was just standing there all alone, overwhelmed, completely relieved and yet totally excited — it was intense.

I had just made it onto my idol’s team (Team Coco), while simultaneously turning down modeling icon Naomi Campbell (scary). But it was over and I could relax, or so I’d thought. That’s when Sandra came in. I have never seen someone so excited in my life. Not even my 5-year-old cousin who received a pony for her birthday was as excited as Sandra was when she came into the loft.

I’d be lying if I didn’t say I was a little shocked. Meeting the rest of the girls was nice, everyone was cordial, but the claws hadn’t come out yet. I knew it was only a matter of time before people started being “real.”

Now that the casting stress was over, it was time for the competition to really begin and our first challenge was a “test shoot.” Test shoots are individual challenges that help us hone our skills for the team challenges, known as campaigns, that were to come later.

Our first test shoot was a “Who Wore It Better” challenge. Two girls were pitted against each other, given the same look picked out by Naomi Campbell herself (who would be judging the challenge), and a table full of accessories to make the look their own. First up was Devyn, who chose Stephanie because she felt she was “the weakest link.” It turns out she wasn’t, Stephanie blew Devyn away with a simpler approach and won the round.

The next Team Coco girl to face off was Marlee, who chose Sandra, again winning with the “less is more” approach. I was the next Team Coco girl to go up. I chose Aleksandra, and we were assigned a ‘60s themed look. Aleksandra claimed she didn’t know anything about the ‘60s because she wasn’t born yet. I wasn’t born yet either and yet I know what mod is.

I knew I wanted to keep the accessories simple because the look already had a lot going on with a striped top, a checkered bottom, and an oversized structured coat. So I grabbed some flats and a pair of retro monochromatic earrings. Naomi said the ‘60s is the one we could have gone “crazy” with, but I disagree with that. Regardless, she chose my simple approach over Aleksandra’s modern attempt at the ‘60s. 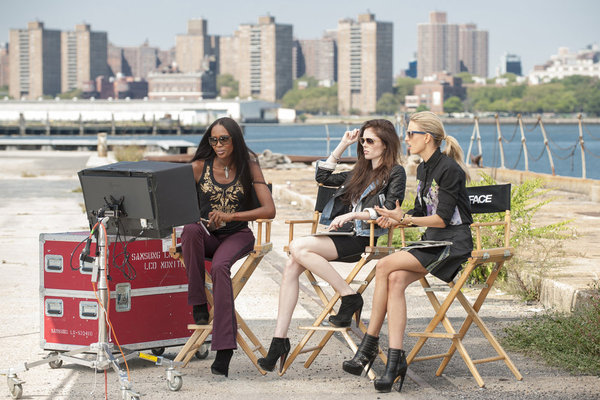 Fast forwarding, Madeleine cried over her shoes being too small, which is something we all have to deal with in this industry. No model’s shoes are ever the right size. Coco once did a show for Prada in shoes that were three times too small, but she walked in them like they fit her perfectly. “Grin and bare it” is the model motto.

Next, Zi Lin beat out Brittany, even though she didn’t put her pants on, which seems ironic considering that Madeleine was eliminated even though she did end up wearing the shoes that caused her pain. I’m pretty sure you would be fired if you refused to put your pants on for a runway show.

Stephanie was eventually beat out by Zi Lin in the “hippie chic” theme challenge and Jocelyn won over Marlee in the “urban girl” round. That means I was Team Coco’s last hope against two Team Naomi girls in the final round. The theme was “masculine chic,” and Naomi prefaced that she didn’t even want “androgynous,” she wanted it to be completely masculine.

So my first choice was a pair of flats. Zi Lin grabbed the ones I wanted, so I grabbed the only other pair they had. For jewelry, I didn’t want it to be sparkly, this was a masculine challenge, but I had to accessorize it somehow, so I grabbed the oversized clear plastic earrings and bracelet. I didn’t grab a purse because that would make the look more feminine. I rolled the sleeves and pant legs up, and chose to not wear a shirt underneath and voilà, I looked like a handsome young woman.

Jocelyn seemed to completely miss the mark with heels, a big purse, and a ponytail, while Zi Lin wore a floral bustier, gold jewelry, and a finished the look with a clutch. Naomi was shocked when I walked out and went on and on about how amazing my look was, but in the end she chose Zi Lin, her exact words being, “She’s been creative, but yet still sexy and ‘feminine.’” I can’t honestly say her choice was unbiased. Zi Lin was on her team after all, and before the challenge even started she said she’d be lying if she didn’t want one of her girls to win. Bye-bye $5,000 shopping spree at Top Shop, so close, but yet so far!

Next up was the campaign. Nigel told us we were shooting the last scene in a story line that would appear in an issue of W magazine. That is huge! I’m pretty sure my jaw dropped to the floor. It is every model’s dream to be in W magazine, and I am no exception. All I know is that I want to impress this client no matter what happens.

Team Coco decided to go with three downtown girls versus one uptown girl. It only seemed fitting since we were at the Brooklyn Navy Yard that there would be more downtown girls around. We decided I would play the uptown girl since my new, fresh haircut was perfect for that of an Upper East Side socialite. We were all dressed in Phillip Lim, my entire floral silk ensemble was to die for. I tried my best to run off with it after the shoot, but no luck though. Brittany, Marlee and Stephanie were the downtown girls, so they slicked their hair back and gave themselves a darker eye for the makeup. I stuck with a clean eye and a dark lip so my look would contrast with theirs.

We had a pretty good idea of how we were going to pose, but then Coco showed up and really encouraged us to push the limits. She never plays it safe and she didn’t want us to either. So we agreed on this West Side Story meets Michael Jackson’s “Beat It” dance-off. There would still be a power struggle, but we would show it in a more fluid way than just standing there and posing like the other teams were going to.

Next, Nigel announced that the legendary Patrick Demarchelier would be photographing us. I was surprised I didn’t pass out. He is the Naomi Campbell of the photography world. He’s photographed Brad Pitt, the late Princess Diana and, of course, our coaches Naomi, Karolina and Coco. Everyone knows who he is and wants to work with him. He can easily make or break your career. I knew that now was the time to put my best face forward (pun intended).

Team Coco lined up and Coco would count to three. Every shot I would change my pose, and the other three girls would try to perfect theirs. Usually in the modeling industry, group shots are put together in post, meaning people are photoshopped in looking their best as an individual later. It’s really difficult to get everyone to look good simultaneously in a shot, but on that day we didn’t have that luxury.

After seeing what Team Naomi and Team Karolina did, I think we definitely took the most risk, but I don’t know if it was the right decision given this was Stephanie’s first photo shoot ever. She was really struggling with her facial expressions and poses. Later, the coaches met with Stefano Tonchi, editor-in-chief of W magazine, Claudine Ingeneri, bookings editor for W magazine, and legendary model-agent Bethann Hardison.

Tonchi said he loved me and that I looked “dramatic and very ‘70s,” but Hardison pointed out how unfortunate Stephanie was in her posing. Tonchi redeemed Stephanie by saying her face was the “most modern” and that he could see her on many runways today. In the end, Team Karolina won with their well-styled, safe photo. 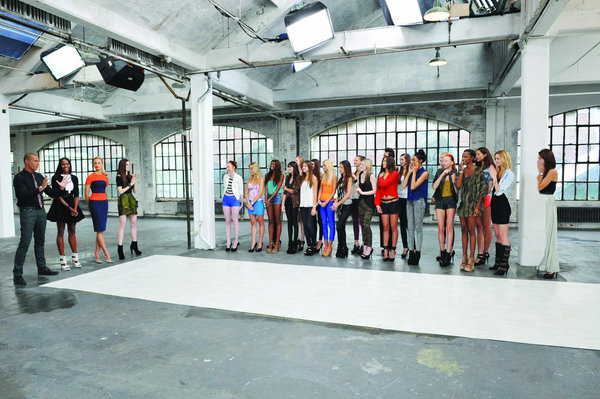 Back at the loft, Nigel handed out our team photos for the W magazine challenge and we all agreed that we liked it, but that Stephanie looked a bit off. Stephanie even admitted it was “everything she imagined, in the worst way possible.” I felt bad for her, but Coco had to put someone up for elimination. It was only fair for her to nominate Stephanie. I was pretty sure I wasn’t going to be nominated. I received only positive feedback from Coco, as did Brittany. Although Marlee did have some trouble during the campaign, it was a toss up, but in the end Coco chose Stephanie. She felt it wouldn’t be fair to nominate another girl just because Stephanie needed more time to learn.

Naomi put Aleksandra up for elimination because she wasn’t on point during the photo shoot. Aleksandra seemed to disagree and went unwillingly to her fate, which was now in the hands of Karolina Kurkova. Karolina made good points as to why either girl should stay — Aleksandra is strong and beautiful, while Stephanie is young and willing to learn. In the end, Karolina kept Stephanie, because she felt she needed more time to learn.

Needless to say, as thrilled as we are to have Stephanie back, it doesn’t compare to how enraged Naomi was to find out one of her girls was the first to go home. She walked into Team Naomi’s room, slammed the door, and refused to let the cameramen enter. Karolina had come out to congratulate Stephanie and the rest of Team Coco when she realized Naomi wasn’t there.

Coco told Karolina that Naomi was “not happy” and Karolina bravely attempted to reconcile the situation by opening the door to Team Naomi’s room. Naomi said, “I don’t even want to talk to you right now. Get out,” and slammed the door once again, this time on Karolina’s heels.

Minutes later Naomi emerged to tell Karolina that she did not agree with her choice and that it was “Game on from now on.” Coco Rocha responded, “I guess Karolina didn’t know she was supposed to be Team Naomi, too.”

Tune in next week to see what happens!