Adele narrowly avoided an awkward moment at the 2013 Grammy Awards, thanks to Jennifer Lopez. 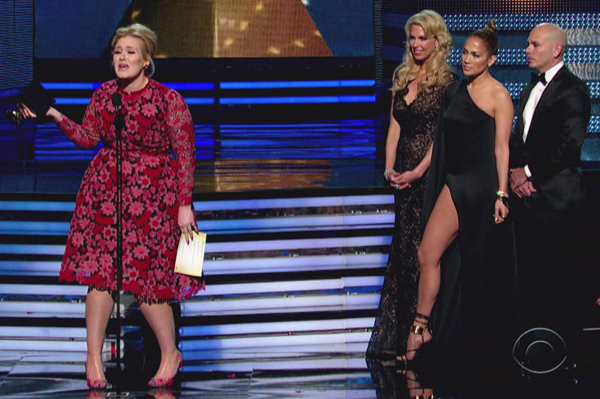 Yo Adele, Imma let you finish…

Actually, never mind: Jennifer Lopez stopped an attempted stage crasher from taking over Adele’s moment at the 2013 Grammy Awards. The only reason we’re hearing about it? The mystery man is speaking out.

Ukrainian television host Vitalii Sediuk sat down with The Hollywood Reporter and explained how he got into the Staples Center in the first place.

“My channel didn’t get credentialed, so I went with friends who had tickets,” he said. “They didn’t check how many we had, so I was let in. First I went to the media line and interviewed quite a few celebrities…. Then I just followed one girl in a green dress through the [Staples Center] gates. They checked my pockets but never asked to see a ticket. Only once I was inside the building did I realize, ‘Oh my gosh, it’s Katy Perry!'”

Did the Grammys just start a Katy Perry/Taylor Swift catfight? >>

Once inside, Sediuk, found a seat — the one reserved for a late Adam Levine — and waited for his moment. He insists he didn’t plan it, though.

“The idea to go on the stage came up at the last second. To be honest, Adele is my favorite singer. So when I heard her name, I came up with this idea to go up on the stage and say what I said…. I pretended this was an award for me, and then I said, ‘Thank you, Adele. You’re my inspiration.'”

He didn’t get too close to her, though: A stern Lopez pushed him aside.

“I don’t remember her [facial] expression, but I remember someone pulled me. When I saw the video, I realized it was Jennifer Lopez,” he added.

He was later arrested for his shenanigans.

“People were quite angry. I felt very nervous — this will sound funny — and I asked for water. And one guy was so furious, but he brought water,” he continued. “Then police guys took me to a room and asked a lot of questions about how I got inside.”

This isn’t the first time Sediuk has pulled a stunt on an A-lister, though. He earned a slap from Will Smith last summer when he tried to steal a lip-on-lip smooch with the actor.

Read on for more on the Grammy Awards