Alec Baldwin and his wife, Hilaria Thomas, have confirmed the news: There’s a new baby Baldwin on the way! 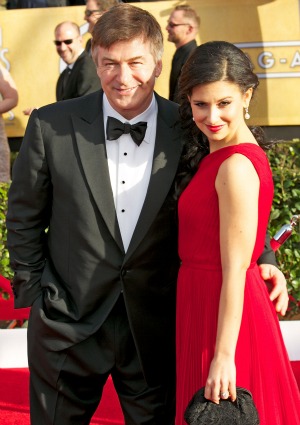 It’s official! After weeks of us seeing Hilaria flash her burgeoning baby bump on TV, Alec Baldwin and his new wife have confirmed they are expecting a baby.

“We’re having a baby! It was a surprise, a wonderful surprise,” Hilaria shared with Extra, where she moonlights as a special correspondent.

Baldwin, 54, is already a father — his daughter Ireland (mom is ex-wife Kim Basinger) — is 18 years old. He and Hilaria, a yoga instructor, wed in June after a three-month engagement.

The 30 Rock star explained how he learned the news.

“There’s a scream I heard, which is a scream normally reserved if there’s a spider in the house — not exaggerating. Normally, I will be reading a book. We’re in the country, it’s quiet, some time to really relax and unwind and sometimes, once a month, you hear ‘Ahhh, Alec, Alec!’ I come upstairs, and there’s a spider on the wall. So then I hear that scream again, but it was not a spider.”

Hilaria added, “It was followed by ‘I’m pregnant, I’m pregnant!’ He runs up the stairs and I’m holding it [the test] and showing it to him.”

“We can joke all about it, but it’s honestly the most amazing moment,” Baldwin said. “We are really sharing something special.”

The couple also released a statement to People, saying, “We’re so thrilled and we can’t wait to meet our baby.”

The new baby Baldwin is due in late summer.

Alec Baldwin’s daughter says he’s not really a jerk
Alec Baldwin offered to take a pay cut to save 30 Rock
Can Alec Baldwin keep from freaking out at the SAG Awards?