Guys with Kids star Jamie-Lynn Sigler is not only engaged, but she is also expecting her first baby with her fiancé, Washington Nationals player Cutter Dykstra. 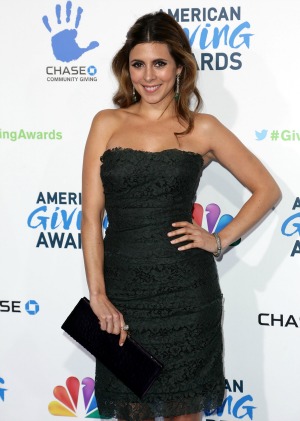 Jamie-Lynn Sigler is about to have a very big 2013. Not only is the former Sopranos star set to wed her fiancé, Cutter Dykstra, this year, but she also announced on Tuesday that she is expecting her first child. The baby news comes on the heels of the engagement announcement, which happened 16 days ago.

A source told People, “She couldn’t be more excited!”

Perhaps all of her time on her current show, Guys with Kids, inspired her to start her family this year. The couple began dating in early 2012 after being introduced through mutual friends — fellow athlete and Yankees star Nick Swisher and his wife, actress Joanna García.

Dykstra currently plays for the Washington Nationals. He is the son of jailed baseball star Lenny Dykstra, who is serving three years for a host of charges, including grand theft auto; identity theft; and possession of cocaine, ecstasy and human growth hormone.

Sigler, 31, announced her engagement to the ballplayer via Instagram with a photo of her gorgeous diamond ring and the caption, “So this just happened…,” followed by two hearts.

Her 23-year-old fiancé tweeted the official response, “She said yes!!!”

This will be the first child for both Dykstra and Sigler. Sigler was previously married to A.J. Discala. They divorced back in 2006.