The youngest daughter of Brad Pitt and Angelina Jolie is set to star with her mom in the forthcoming Disney film Maleficent. She has one whale of a contract. 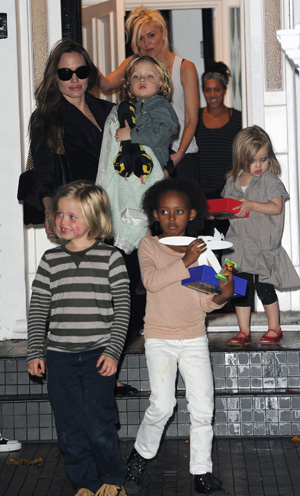 Teensy-weensy Vivienne Jolie-Pitt is making pretty good money for a 4-year-old: The preschooler gets $3,000 a week for her work on the upcoming Disney movie Maleficent, starring with mom Angelina Jolie, according to TMZ.

In addition, in case that weekly $3K isn’t enough to keep her in chicken nuggets and apple juice, she gets a per diem of $60.

Vivienne plays the young version of Elle Fanning’s Princess-Aurora-a.k.a.-Sleeping-Beauty in the movie, which retells the classic fairy tale from the perspective of its villain (Maleficent, natch).

Us Weekly reported that Vivienne’s brother and sister, Pax and Zahara, have small parts in the movie too; no word on how much they made.

Us Weekly’s source also said Shiloh Jolie-Pitt was supposed to be in Maleficent too, but “she was bored and not in the mood during the day her part was supposed to happen, so she ended up not being in the film.”

Oooh, if that’s true, imagine how annoyed the older Shiloh will be when the family watches “their” movie some Thanksgiving afternoon in the future.

Angelina Jolie is back on the red carpet >>

Maleficent is set for a March 2014 release. Jolie plays the lead role of Maleficent. Wanna see what she looks like? Here you go: Angelina Jolie as Maleficent.

Jolie also has a younger double in the film: 18-year-old India Eisley plays her younger self. Eisley is best known for her lead role on The Secret Life of the American Teenager (she’s the younger sister of the character who got pregnant, played by Shailene Woodley).

Jolie told Entertainment Weekly that she was having a blast working on Maleficent: “It’s a really great script. I’m having a lot of fun. I’ve already got my horns fitted. My kids are very happy.”

Jolie also told EW that Maleficent doesn’t flip the story exactly, but “in general, it’s a very good message to say, ‘Let’s look at something from the other side.'”