Militant NRA spokesman and outspoken Obama opponent Ted Nugent is heading to Washington, D.C., to sit in on the State of the Union address. Bad idea? 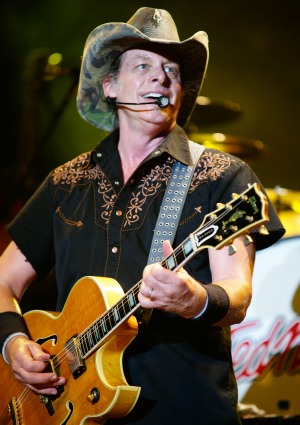 He once threw a thinly-veiled threat at Barack Obama, but now outspoken NRA advocate and rock star extraordinaire Ted Nugent will be sitting in on the president’s State of the Union address Tuesday night.

Nugent, who last April said, “If Barack Obama becomes the president in November, again, I will be either be dead or in jail by this time next year,” and in 2007 stated, “Obama, he’s a piece of s**t. I told him to suck on my machine gun. Hey Hillary, you might want to ride one of these into the sunset, you worthless b***h,” was invited by Rep. Steve Stockman of Texas.

“I am excited to have a patriot like Ted Nugent joining me in the House Chamber to hear from President Obama,” Stockman said in a press release. “After the Address I’m sure Ted will have plenty to say.”

“If I were the GOP leadership, the prospect of further comments from Nugent after the speech would have me a bit worried,” wrote political analyst Greg Sargent in the Washington Post.

Ted Nugent has a date with the Secret Service >>

The militant gun enthusiast will be sharing the room with surviving children from Sandy Hook Elementary School and other victims of gun violence. But don’t worry — Nugent assures us he’ll be leaving his personal arsenal at home.

“I will go in at least 20 pounds lighter than I normally walk,” he told the New York Times today. “I will be going in sans the hardware store on my belt. I live a well-armed life, and I’ve got to demilitarize before I go.”