Beyoncé shares the most intimate details of her relationship with Blue Ivy for Vogue‘s March 2013 issue. 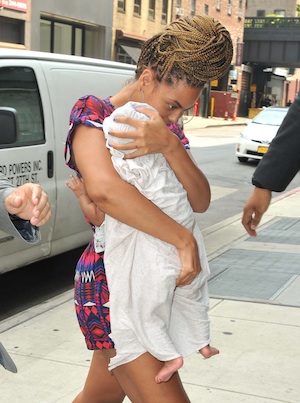 It’s clear to most of the general public Beyoncé is rapidly reaching a new peak in her career. The 31-year-old self-empowered entertainer is riding a wave of both personal and professional success that began with the pregnancy of her daughter, Blue Ivy Carter.

Blue Ivy is now a year old and Beyoncé is all motherhood in the interview for the March 2013 issue of Vogue. Beyoncé talks to Vogue during breaks in a L’Oreal commercial shoot after a month of scheduling issues left the magazine a bit exhausted at the realization of Beyoncé’s power: she calls the shots, she draws the boundaries.

Pictures: Beyoncé and Blue Ivy together on Tumblr >>

Vogue and Beyoncé talk and the conversation heads toward Blue Ivy as she coos and softly cries nearby. Beyoncé tells Vogue, “She’s about to go to sleep,” as she smiles with pure joy. Vogue lets Beyoncé reveal motherhood in her own way, and the entertainment mogul explains that her connection with Blue Ivy was solidified during labor, and now the two are destined for the ultimate friendship. Says Beyoncé about Blue Ivy, “She’s my road dog… she’s my homey, my best friend.”

Labor was spiritual for Beyoncé, and she describes the powerful experience and soulful visual she experienced while giving birth to Blue Ivy. “I felt very maternal around eight months,” says Beyoncé. “And I thought I couldn’t become any more until I saw the baby… But it happened during my labor because I had a very strong connection with my child. I felt like when I was having contractions, I envisioned my child pushing through a very heavy door. And I imagined this tiny infant doing all the work, so I couldn’t think about my own pain… We were talking. I know it sounds crazy, but I felt a communication.”

Check out the March 2013 issue of Vogue featuring Beyoncé and more details on Blue Ivy.