She’s been following the group around and turning up at their shows for months. Now singer Max George admits they had a thing going. 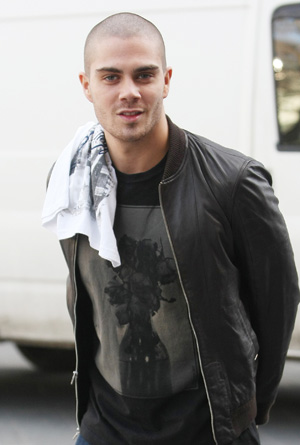 English-Irish boy band The Wanted got plenty of press due to its most famous groupie, and now “Glad You Came” singer Max George admits that yeah, he and Lindsay Lohan were briefly an item.

E! News asked George during an interview promoting The Wanted’s forthcoming reality show whether he and Lohan had had a “snog” (non-Anglophiles: This means a kiss).

George quickly doused further rumors by adding, “She’s a friend of all of ours and she is a lovely girl. We wish her all the best, wherever she is.”

Translation: She’s not with George now, and won’t be in the future.

Gossip-watchers were more interested in the George-Lohan fling than usual, and not just because Lohan is a tabloid magnet: Up until the summer of 2012, George was engaged to British actress Michelle Keegan, whom he met at a Wanted concert. So clearly the fella isn’t averse to picking up chicks at shows and planning to hang on to them.

Hey Ladies! The Wanted get a reality show >>

Fueling the rumor mill, Lohan was arrested in a New York club in November, allegedly over a fight about George. Then in January, she posted an Instagram picture of herself and George in what looked like a hotel room.

Nonetheless, George told E! she was more of a party girl than a girlfriend:  “She was good to party with, but there’s definitely not going to be any babies on the horizon.”

George also addressed the Lohan rumors on Twitter, where a fan tweeted that she would die if he was dating Lohan. “I’m not so you’re fine!” George tweeted back.

Another fan then tweeted “If you don’t go out with linday lohan..can we get married then yeah?” George responded “Well I’m certainly not so maybe. Rumours… That’s all… Like I said… 1million %.”

Meanwhile, George admitted he had a (musical) crush on another American starlet: The band is eager to collaborate with Taylor Swift.

Bandmate Nathan Sykes added that they already had a “perfect” song in mind for the “We Are Never Ever Getting Back Together” singer; while Jay McGuiness agreed, “That would be really cool. Someone mentioned that and we thought, ‘Wow, that’s a really good idea.’ So we could get on that.”